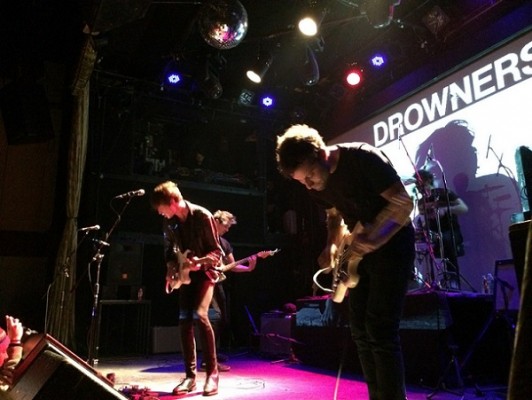 Bushwick’s Honduras started the night off with a blast of youthful vigor and a twist of vintage punk. On lead guitar and vocals, Pat Phillips’ charisma contributed to the mature image of his band. Their growth will continue in 2014 as we await the release of their Morality Cuts EP.

I personally didn’t feel as though Ski Lodge fit the bill particularly well. They were a drastic change of pace, and I think they were a bit awkwardly sandwiched between the rompy energy provided by Honduras and Drowners. That being said, I’m a staunch advocate for Ski Lodge’s debut LP, Big Heart. As they did when I saw them in May last year, they closed out the set with their most robust offering, “Just To Be Like You,” which always leaves me satisfied. The live material needs some pizzazz, but in another time and place, this set would have been more effective.

Headed up by British model and heartthrob Matt Hitt, New York City-based Drowners headlined the evening in support of their debut self-titled LP released on January 28. They had a great portion of the audience swooning while the remainder of the spectators found solace in bouncing along to tunes reminiscent of early-Strokes. Their upbeat nature was energizing as they blew through their set, playing a good majority of their debut self-titled debut LP in order, while skipping several of their less peppy offerings to maintain the mood. Their biggest hits, “Long Hair” and “Luv, Hold Me Down” are short and sweet, and even bigger pleasure to experience live. Their set came complete with a pair of dancing girls on stage at one point, and a seemingly band-endorsed crowd surfer towards the end.