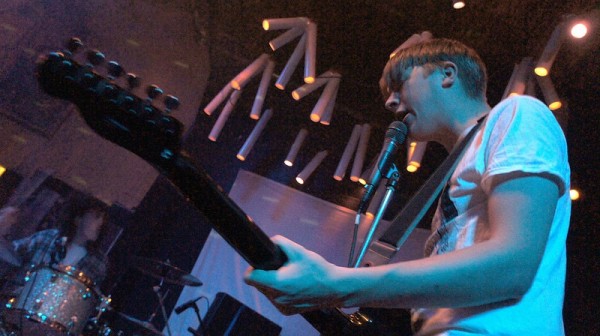 It was a gnarly grungefest Saturday night at Glasslands in Brooklyn. Coming off their United States live debut at Mercury Lounge on Friday, British grunge/blues brothers, Drenge, put on a gritty show. Brooklyn’s own, Heliotropes, properly primed the evening for Drenge with their spellbinding ways.

In terms of style, Heliotropes craft some serious genre mixology. Quality drumming and hypnotic guitar shredding were just several positive aspects of their set. The backing vocals and tambourine from Amber Myers were haunting. On lead vocals, Jessica Numsuwankijkul droned on while captivating the crowd with a delightfully heavy, fuzzy guitar product. I picked up on some 80’s shoegaze and 90’s alternative vibes. We heard a new untitled track that was thematically “about Michigan”, along with selections from A Constant Sea.

Drenge’s melting pot of grungy blues and punk manifested itself into an excellent live experience. Brothers Eoin and Rory Loveless demonstrated how strong a simple guitarist and drummer combination can be. From opener, “Gun Crazy”, to set finale, “Face Like A Skull”, they performed the strongest offerings from their self-titled debut LP. Eoin tore things up on guitar and provided an articulate, edgy baritone while Rory pounded incessantly on drums. The end result was a thrashing, in-your-face attitude.

We heard their consistency in several tracks that were new to me, like “Necromancer” and “Running Wild”. Fast-paced “Bloodsports” flawlessly seeped into “Nothing”. Recently promoted “Fuckabout” and its anti-social undertones rounded out the set. It sounded off as sullen anthem: “I don’t give a fuck, about people in love, they don’t piss me off, they just make me give up”.