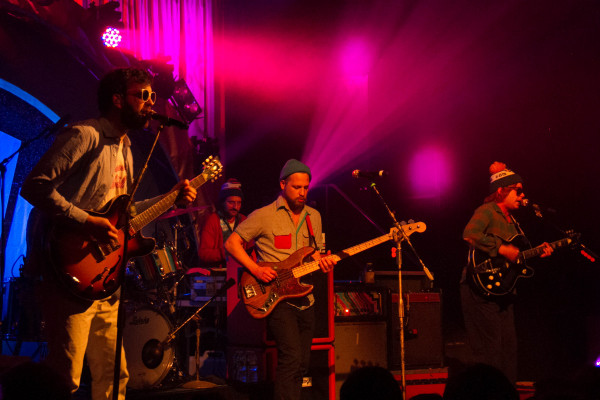 It takes a strong catalog and an even stronger fan base to pull off an eight date stint of a tour in a single city. For the seasoned vets known as Dr. Dog, this was an opportunity to showcase the true range of a band that has spent the better part of the last 25 years becoming mainstays at festivals across the planet. NYC provided the venues; 4 nights at Brooklyn’s Music Hall of Williamsburg and 4 nights at Manhattan’s Bowery Ballroom. All that was left was having Dr. Dog bring their trademark big festival energy and 70+ song catalog to a more intimate crowd.

For the final night at MHoW, Dr. Dog showed to the Brooklyn contingent what 4 years of medical school has the power to do. Without wasting any time or energy, they quickly fired off a mix of old favorites and fresher works from their new album. As the set worked its way deeper into the night, the atmosphere started to shift from a more straight-laced affair into a familiar, festive atmosphere. Cracking jokes with the crowd and pulling a few musical shenanigans further loosened everyone up just in time to break out the bigger hits of the bands repertoire. Calling from the stage, “What is it take to be lonesome?”;  the response, “…Nothing at all!”, unified the crowd as this response was chanted back and up to the rafters. Closing out their extensive 2 hour set, a few special guests and a booming encore made sure everyone left happy.

A young and high energy group, The Districts, seized the opportunity to open and provided a fantastic, distinct set. A high range, dynamic band which featured impressive instrumental ebbs and flows was only highlighted by the frenetic energy they displayed during their heavier numbers. These guys were impressive and fun, with a new album coming out; keep your eye open for them as headliners in the near future.