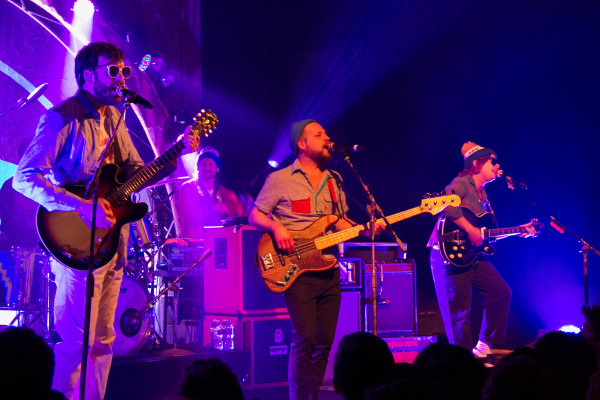 Twain were the home town heroes on January 9th as they kicked-off as openers for Dr. Dog’s four night sold-out stint at Music Hall of Williamsburg. The Brooklyn- based band played folky ballads highlighted by nuances of raw vulnerability unique to a three-piece. A vocal duo joined at the end of the set, layering smooth chill-inducing harmonies on top of powerful guitar surges, effectively leaving the venue buzzing with excitement in their wake. Other MHOW openers included The Districts, Elvis Perkins in Dearland and Mewithoutyou

The Philly Indie-rockers, Dr. Dog are on the road to support their latest album “Live at a Flamingo Hotel” released January 13th through Anti, it features nineteen tracks compiled from highlights of their 2014 tour of twenty concerts. The thrilling kick-off to their eight night stretch in NYC demonstrated their renowned live presence, only affirming a need for an album of this kind after seven studio records. Music Hall of Williamsburg was home to the first four nights where a sense of solidarity prevailed from the packed crowd of die-hards singing every word right down to the six Dr. Dog members all wearing matching saddle shoes.

The hearty set list started out strong with “Be the Void” and included fan favorites such as “How Long Must I Wait”, “Lonesome” and Architecture in Helsinki cover, “Heart It Races.” The songs reflected their 60’s era influences such as the Beatles and Beach Boys while maintaining elements of their lo-fi beginnings, resulting in an incredible electrifying experience.
Set-List