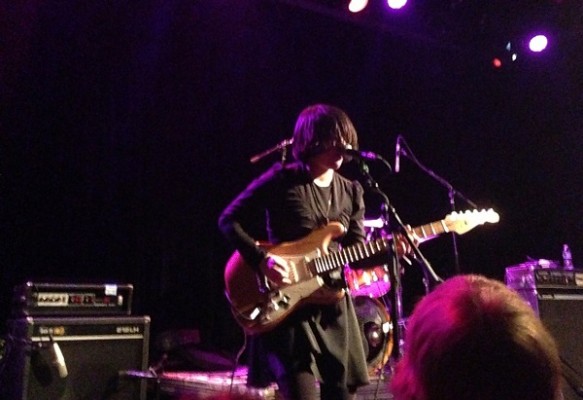 The annual Don Giovanni Records Showcase rocked  Music Hall of Williamsburg for two consecutive nights earlier this month. Each night featured a hot lineup of five bands, many of which were cooked up in the basements of New Brunswick, New Jersey. The acts of the final night offered a dynamic mix starting with anthemic pop punk and further transitioning into heavy rock and metal. Consistent throughout the night however were performances with no holds barred.

Black Wine, hailing from New Brunswick, NJ, opened with the most poppy set. The music was often a balance of sarcasm, sass, and apathy yet always unapologetic and featured elements of new wave with a post-punk meets alternative edge. The three band members exuded such comfort and ease on stage providing an intimate energy.

Next up was Brick Mower, another Jersey trio. The band rocked some catchy riffs over solid percussion layered with mildly angsty vocals. The band continues on an East Coast tour with their third LP dropping in March.

Priests, from Washington DC was a post-punk experience. The singer is a natural performer, and very well may be this generation’s answer to Runaway, Cherie Currie. The band is totally sassy and no nonsense yet show remarkable vulnerablity.

California X from Massachusetts thrashed through their punk rock set. The band offered satisfying guitar licks generously laden with hooks; perfectly paired with majestic headbangs. They are sure to thrill as they continue on a Northern US/Canadian tour throughout the month of March.

Screaming Females were hotter than ever and held nothing back especially when it comes to masterful heavy riffs. Marissa was a rock goddess unleashing powerful shreds and wails even while rolling on the stage or surfing the crowd. King Mike joined the fans also, in the meantime entrusting a concertgoer with manning the bass. Reinforcing the energy that Jarrett held down on the drums while smoothly flowing seamlessly between tempos. Always on point, this band casts an aura of effortless chemistry.

Saturday most definitely proved Don Giovanni Record’s bragging rights. The lineup of this showcase highlights the successful tapping of the rich punk music scene pumping throughout basements along the East Coast.