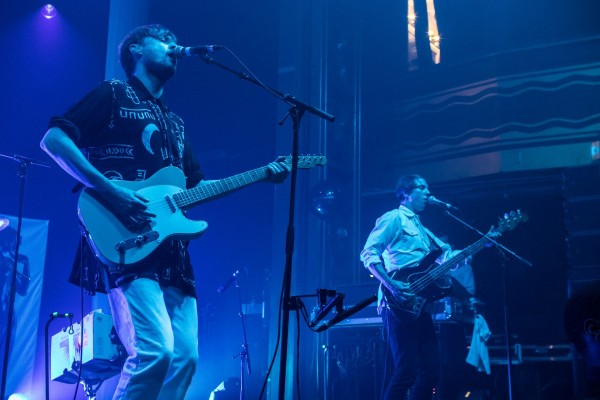 Circle back to a sweaty, packed house late one Winter night at Glasslands two years ago and those who were there will recall Django Django’s first show here in the States, which was a roaring, sold out affair that went on until 3 AM. Since then, the band has released two albums and graduated to filling the high capacity of Webster Hall. To see the successful translation from tiny warehouse to thousand plus audience concert halls of one of your favorite bands is a wonderful thing to witness.

The band’s still four, plus occasional sax, for the upped-ante live show. It now features visuals, a strong use of lights (making photography quite challenging,) and a booming bass, though that may just be Webster Hall’s sound system. With Django Django’s wild surf sounds, dancing on the venue’s trademark bendy floors cause “Waveforms” to become a literal thing. I’m always afraid they’re gonna give under me when I’m cutting a rug there though.

I’m not quite sold on DD’s new record, Born Under Saturn[Ribbon], and neither is the band apparently, only having four songs from it making the new setlist. It’s enough to pad it and get the show over an hour for big stages, but I hope they can follow back up soon with a record that knocks the socks off their competition, sort of like how they’re Mercury Prize rivals in 2013, Alt J, did last year with This Is All Yours, which culminated with them selling out MSG.

Kudos to Beat Connection, a half electro pop/half indie rock quartet out of Seattle, who were an apt pick for the night. They’re now signed with ANTI-, releasing a groovy new single “So Good” just last month on the label, in advance of a record, Product 3, this Autumn.