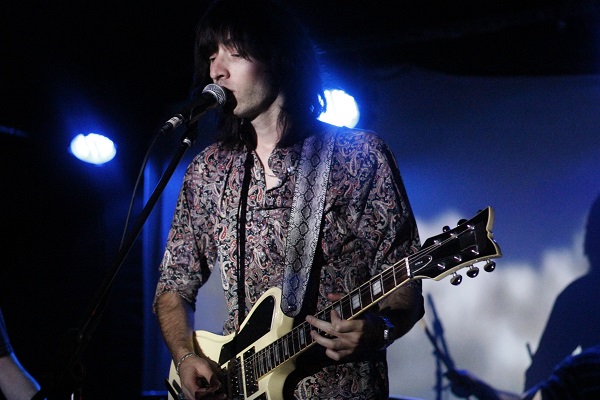 Nobody induces psychedelic new wave flashbacks these days quite like Dinowalrus. After sufficiently establishing themselves with their second full length, Best Behavior in 2012, the band has resurfaced this year with a brand new album, Complexion. After playing New York shows fairly regularly since last year, Sunday June 8 at Mercury Lounge was devoted to the new release and featured several other local artists. It is also worth noting that Juan Pieczyanski of Small Black was in the house running a DJ set and all of his picks, whether My Bloody Valentine or Siouxsie and the Banshees, fit the ambiance of the evening awesomely.

First up was Sunflower Bean, a band in the younger stages of its life, and I’m interested in their direction. The three-piece began the night with their dark wave influenced psychedelia and guitar. The group might not have been around for long, but I like their haunting harmonies and melodies.

Experimental electronic jam-like tunes from Zula kept the night rolling. They play around with thick layers of vocals and instrumentals with specks of keyboard integrated throughout. Their set had its twists and turns with no two grooves sounding alike. You get an even better feel of that with some of their studio material.

Following the Dinowalrus set, capping off the evening was Visuals, the moniker of Andrew Fox, who produced some mind-bending, distorted, but energetic beats.

I often wonder if Dinowalrus frontman Peter Feigenbaum ever draws an Ian McCulloch comparison. McCulloch and Echo and the Bunnymen are one of my favorite things to happen to the 1980s new wave era, and Dinowalrus echoes that style with a more synth foundation. “Grounded” and “Mispronounce” bear a crazily striking resemblance to Flowers or Evergreen-era Bunnymen. Their live set remains a strength for them, due in part to the constant stream of colorful visuals projected on stage, steady instrumentals and percussion extensions. Feigenbaum tore through the guitar solo on “Tropical Depression” and the band gave us some material to get our groove on to with “Psychic Pharmacy” and “Wake Up in the Void”.

Dinowalrus finished things off with “The Gift Shop”, possibly their most recognizable track in their catalog. I was also happy to have left the show with a vinyl copy of Complexion in hand, one of 250 copies that came about following the success of a Kickstarter project that Dinowalrus set up earlier this year.

Here’s a link to my full photo set of all the action.