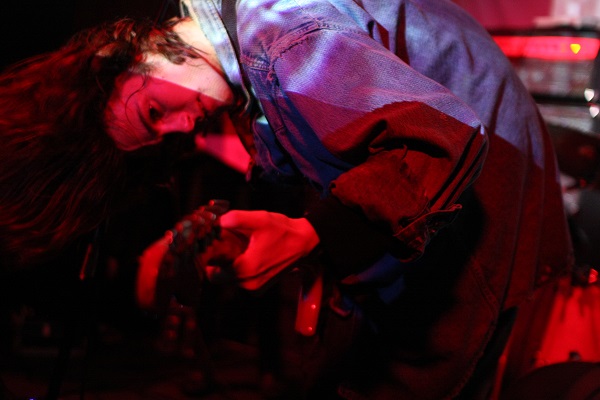 Earlier this April, Converse’s Rubber Tracks Live music series featured a packed show with DIIV, Nothing, and Lofts at Glasslands Gallery in Brooklyn. DIIV was started as a solo project by Zachary Cole Smith, guitarist of indie surf rock band Beach Fossils, that later recruited childhood friend Andrew Bailey as a guitarist, bassist Ruben Perez , and drummer Colby Hewitt. The band took their name from the Nirvana song Dive and later changed it to not be confused with a Belgian Industrial group of the same name and debuted their album Oshin in 2012. They’re based in Brooklyn.

DIIV has elements of dream pop and shoe-gaze, and you could definitely tell that by the sort of energy they display in their songs, which sound like dreamy jams, and the chill atmosphere the crowd was part of during the show. However, a mosh pit was formed for a second for “Doused“, which was also great. They played songs from their debut album and a couple of new unreleased songs (“Dust”) as well. Zachary pointed out that this was the last time we would listen to their old songs live, now that that they’re working on new material.

The show was initiated by indie rock duo Lofts. It was a short set with some nice and fun lo-fi sounding songs. Then fellow indie shoegaze and noise rock band Nothing, which just released their debut album Guilty of Everything this past March, performed the following set. Their performance was far more dark and grungy, something I didn’t expect after sampling their songs prior to the show.

DIIV has a very clear sound and distinct energy, and some of Beach Fossil’s surf rock vibes are in display here thanks to Zachary’s guitar riffs. Oshin is a great album to bring out with you to the beach or a road trip, bring your friends along and jam to it all day long. Some of the new songs were also a lot of fun and made me crave more new material from Zachary and company. DIIV will continue work on their new album in the upcoming months and hopefully grace us with some new tunes sooner than later.