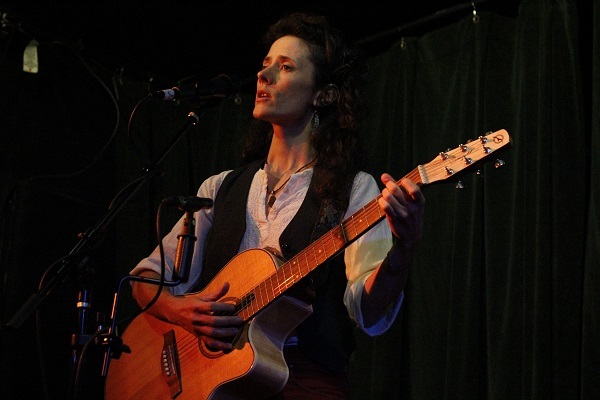 An eclectic array of instrumentals, cool but simplistic background stories, and soft, powerful vocals are what made Diane Cluck‘s set at The Outer Space on September 13 a strong showing. Taking to the stage all by herself, she cycled through her guitar, toy accordion, zither, and a family handcrafted instrument derived from a xylophone, among other equipment. The last time we caught her live back in February, her latest album, Boneset, had yet to drop. Since its March release, she has been touring, sharing her creative works.

Classifying herself as an “intuitive folk” musician, Diane Cluck is all about experimentation. She brought members from the show opener, Olive Tiger, on stage during her performance to help provide percussion and to sing a bit of semi-planned acapella. Just like in February, she successfully encouraged audience involvement during “Perigee Moon”. Her track “Sara” was dynamic and beautifully elegant. I believe in her intuitive self-characterization. Its as if her music just came to her, in a dream or overnight or something. Her arsenal of instruments fit the equation too perfectly and paired well with her vocals.

Local Connecticut trio, Olive Tiger, was the opener for the evening, setting a strong folk tone while being more instrumentally driven. Vocalist Shannon Kiley works under the moniker Olive Tiger and would alternate between guitar and cello, working in samples of herself as backing tracks. With Jesse Newman on violin, chipping in with some fierce solos, it was a strong culmination of strings and a definite attention-grabber.