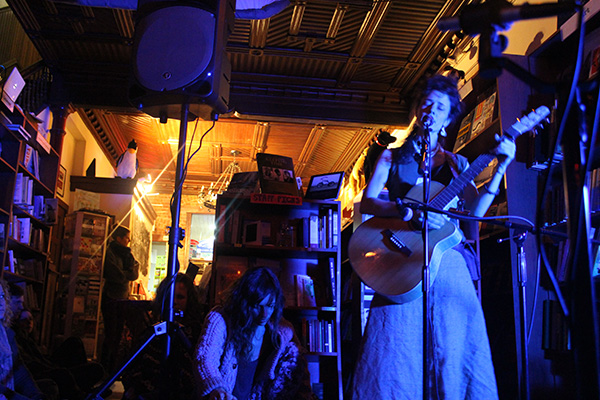 For all intents and purposes, let’s assume that Diane Cluck spent a past life as a bird. Take her themes both avian and reincarnate, her signature angular warble, her jerky yet graceful stage presence… and yeah, her name too.

Spotty Dog, the venue that kicked off Cluck’s 60+-date tour, crams both bar and bookstore into standard shop-window real estate, while still leaving room for minimally-lit music acts and a modest crowd (though that means an occasional toppling hardcover into the performance space). Saturday’s opening set came from local Liv Carrow of DIY label Olive Juice Music, home to Jeffrey Lewis and other antifolk figures. Although four inches of Poughkeepsie parking lot ice kept me from seeing her play, it seemed a beautiful affair from what I overheard, and surely a fitting preparation for the self-described “intuitive folk” set that followed.

Cluck came across more soulful and impulsive live than her recordings had betrayed, while somehow maintaining record-quality crispness and precision in her characteristic vocal hopscotch. She occasionally lapsed into short a cappella pieces like “Grandma Say”, which combines a rootsy rhythm and twang with jazz-inflected vocals that bring to mind an early Regina Spektor, distilling it all down to what could easily pass for its own age-old folk template. Cluck moved beyond the acoustic guitar to incorporate a 1940s-era toy accordion, a zither, and a shruti box into her set, each seeming a natural component to her genre-bending aesthetic. She demonstrated her trust in the audience on multiple occasions, calling for crowd contributions of rhythm backing for two songs and vocals for the call-and-response chorus of “Perigee Moon”. The audience responded in kind; a bartender noted that she had never heard in-concert conversation kept to such a minimum. All in all, a vibrant, intimate performance that will stick with its attendees for a good long while.

In fact, this reviewer was sufficiently wowed to execute his own concert-going first: follow through on an invitation to come see her again the next day, in closer-by New Paltz for a low-profile house show. This just-off-campus collegiate locale offered a Diane Cluck who was even more warm and “easy to be around” than my precedent had suggested. She eschewed some of the impressive energy and meticulousness of her previous night’s performance in favor of a lengthier setlist, multiple requests, and more detailed banter.

It must have been more a product of my assumptions than of any real evidence, but I still felt that at that house show, I was being treated to a decade-and-a-half glimpse into the past, when a just-starting-out Cluck was playing the same NYC venues as antifolk figureheads like Jeffrey Lewis and Kimya Dawson. And though she may have seemed near-dormant in the eight years since her last studio release, 2006’s Monarcana, next month’s release of Boneset seems to affirm that if she went anywhere, she’s been born back into songwriting splendor. As Boneset’s opener contends, “when I die / I may try to find you / be forewarned: I may be a bird or a boy born poor.”