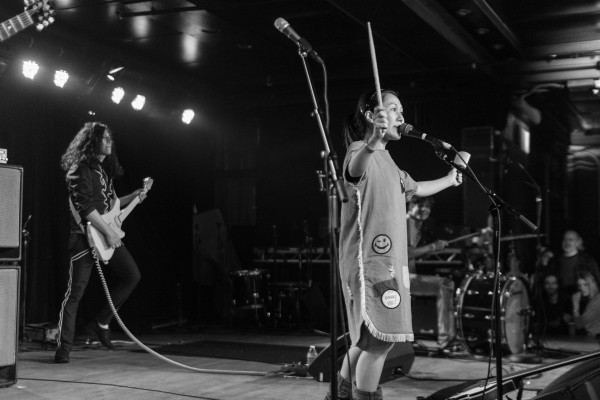 Deerhoof concluded the US leg of their tour Saturday night at Webster Hall’s Marlin Room. The band’s most current album, La Isla Bonita, released September 2014, was certainly featured but Deerhoof always makes sure to give the audience a taste of every sound they have progressed through in their incredible twenty years of existence. The Marlin Room is a perfectly intimate venue with a charming 70s’ disco vibe about it, making it a proper vessel for energetic bands Zula, Perfect Pussy, and Deerhoof.

Zula warmed up the crowed with their otherwordly, psychedelic grooves that manage to hit that sweet spot of danceability and experimental exploration. Zula released a new EP, Water Pressure, under the Zula/annex moniker earlier this month. The band really delivered in bringing their work to life and toned up the rocking appropriately for a live gig. They left the crowd with more than enough energy for Perfect Pussy.

Perfect Pussy came out with a roar in all their hardcore noise rock glory. It was loud,  it was fast, and it was intense watching singer Meredith Graves writhe through each song as bandmates shredded and banged as much out of their instruments as humanly possible. Openers Zula and Perfect Pussy were a spot-on introduction to Deerhoof’s broad sound ranging anywhere from noise rock to experimental pop.

There is no star of Deerhoof. I wish I had more eyes so I could focus on each of them individually the entire time. Drummer Greg Saunier is perhaps the fastest human in the Universe, fitting more beats into a moment in all the most unexpected places than I ever thought was possible. Deerhoof showcased this capability in their second song, “Buck and Judy“. This song live is utterly mind blowing.

As fast as Greg is, Satomi Matsuzaki is equally as captivating a performer with her personal dance moves you’ll never see elsewhere. But this is really all icing. At the heart of it Satomi owns her bass and sings rhythmically complex melodies while doing it to boot. Satomi and the other lovely ladies who played bass for Zula and Perfect Pussy are the epitome of “Paradise Girls.”

In a world filled with keyboards, Deerhoof remains unique in their passion for guitar and proves that any sound you can make on a keyboard, they can make on a guitar. Guitarists John Dieterich and Ed Rodriguez never cease to amaze me with their ability to trade or share the dissonant off-beat, yet ultimately catchy riffs that are arguably the signature Deerhoof sound that remains album after album. The complexity of “Last Fad” cannot fully be appreciated until you see John and Ed extract the clanging crashing melodies out of their guitars with your own eyes.

It wouldn’t be a Deerhoof show without the appearance of “Come See the Duck,” an old classic and fan favorite. Satomi typically enlists the help of the audience for this number, asking them to sing when she gestures. The song features a very complex rhythm and the crowd has always failed to sing the part at past shows I’ve attended. However, tonight the crowd nailed it straight away. Clearly it was a crowd of serious fans.

If you missed this show, there’s no need to worry. Deerhoof has a history of cranking out albums and will likely be back again in no time with another stellar album.