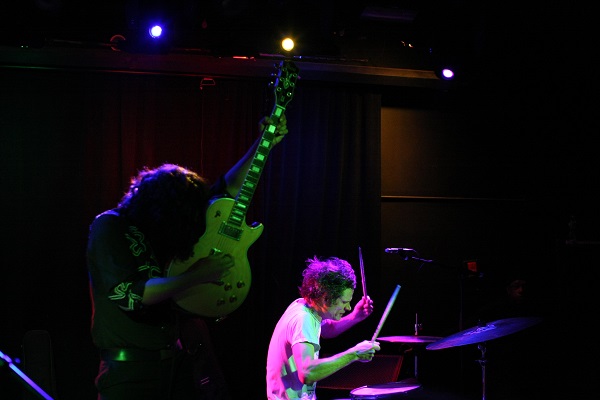 In the spirit of Deerhoof, a 4-piece band comprised of Greg Saunier on drums, John Dieterich and Ed Rodriguez on guitars, and Satomi Matsuzaki on bass and vocals, the theme of the evening seemed to be strong leading (and cute) women and curiously awesome music. Beginning with Awkwafina, New York based female Asian hip-hop phenomenon, and followed by Tomaga, a London based ambient drone band.

Awkwafina reminds the audience what hip-hop is all about by bringing it back to its playful roots with songs like “Queef” and “My Vag”, sure to bring a smile or even a laugh to the most serious of music listeners. Think Z-Trip’s “Breakfast Club” for the general vibe. Her bold and talkative stage presence also provided some solid laughs in between songs as she explained the inspiration for her songs. Lastly, Awkwafina laid down a sweet beat before abruptly and powerfully stomping off the stage with some parting words encouraging more ladies to make beats.

In the complete opposite direction musically, next came Tomaga. Featuring Valentina Magaletti on drums, Thomas Corvid on synthesizer and sound processing, and a third character on the saw, they lulled the audience into a distant trance. Hypnotic tribal rhythms encapsulated in a soundscape of ethereal saw howls and otherworldly synth sounds provided the drone foundation, but the centerpiece was unquestionably the melodic drum lines that drummer Magaletti looked purely blissful to play. With no stoppages in sound, by the end of the set, the audience was truly in a daze, taken to a far away galaxy perhaps in the future.

With the energy quite high after two very unique openers, the audience was really chomping at the bit to see Deerhoof and when they finally ran onto stage, the audience greeted them with a literal roar. As the calm reverb-laden opening melody of “Fresh Born”, off Offend Maggie, entered the airwaves, I immediately got the impression that we were really in for a treat because Deerhoof was not touring a specific album and thus, their vast material was all fair game for the show. True indeed, Deerhoof played songs dating all the way back to their true noise-rock days, closing the evening with the classic “Come See the Duck”, off Koalamagic.

How any human beings can maintain the level of energy that Deerhoof manages to for an entire evening is beyond me. Satomi’s wild kicks and incessant bouncing is the ultimate “Giga Dance”, a song off Milk Man featuring a guitar sound reminiscent of an organ, which they too played. Perhaps the most impressive however, in terms of energy expenditure, has to be Greg, who gets the most sound out of the tiniest drum set, comprised of only a bass drum, snare drum, hi hats, and crash symbol. Greg truly talks through his drums, giving them a melodic quality that makes them the forefront of the music instead of simply providing rhythm. But this style of playing truly takes its toll and he was quite literally drenched in sweat and winded by the end of the evening, a true musical warrior.

However, Deerhoof is not the magically original energetic unstoppable force we know and love because of only two incredible members, but because the entire band is just so ridiculously solid. John Dieterich and Ed Rodriguez both posses the ability to get sounds out of their instruments that I never thought could even be made by guitars, all while keeping to off beat tempos and ever-changing rhythms. It is very uncommon to find a band with 4 essential front men and one of them is even a woman, making for perhaps one of the most uncommon band compositions. A rock solid band with solid rocking music, Deerhoof left me awestruck.