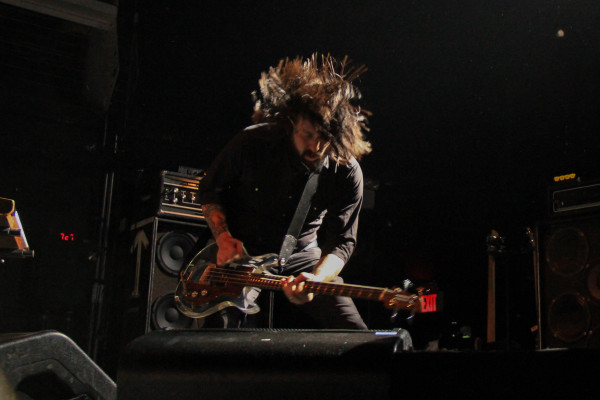 Thriving beneath the glow of their 12 foot effigies and amplified through every available watt on the east side of Manhattan, the artists known as Death From Above 1979 and Biblical provided the most memorable course of the thanksgiving holiday. A mix of new hits and old staples reminded the crowd of the power and energy that has come to be known from the Toronto natives.

First to jolting the crowd awake from their Thanksgiving tryptophan haze was Biblical. A slightly newer incarnation of Ontario hard rockers who welcomed the Terminal 5 crowd with sounds from their debut album “Monsoon Season.” Nick Sewell (Vocals/Bass) and Andrew Scott (Guitar/Organ) have both previously collaborated with DFA’s drummer and lead singer, Sebastien Grainger. This prior collaboration and similar musical background was a masterful compliment to the headlining act and served to bring the show together seamlessly. Biblical’s heavier blend of atmospheric rock and paced, driving crescendos received a warm welcome from the crowd. While the methodical approach to building energy is in direct juxtaposition to DFA’s smash-you-in-the-face M.O., they left an indelible mark and surely made some new fans in NY.

Crystalline bass guitars, acrylic drums and all-out attack power. These would be the tools used by Death From Above 1979 to bring the crowd to a fever pitch in NYC. As Sebastian Grainger and Jesse Keeler took the stage they wasted no time getting straight to business. Sebastian played on an elevated drumming platform, perched before a 12’ tall illuminated incarnation of their latest album cover. This served as a makeshift altar (see: Biblical) to which Jesse would thrash, dive and weave in front of. A bank of strobe lights flashed the unrelenting moments mayhem, much to the crowds delight.

As they worked their 18 song set through the night, the true essence of the band could be experienced in full form. Their set featured a large portion of songs from their latest album The Physical World, an album which has brought critical acclaim and mainstream success. Older hits were intertwined and still pack a punch that is reminiscent of performances past. This pulsating, visually jarring, all out sensory assault is what we’ve come to expect from these seasoned vets and at Terminal 5 they certainly did not disappoint.

Death From Above 1979 and Biblical wrap up their tour of the east coast this week, stopping in Boston before moving on to Canada and then Europe. If you missed them at this show, check out the featured pictures and make sure to see them live next time they come around! Also, keep a look out for side projects and solo works from the members in the months to come.