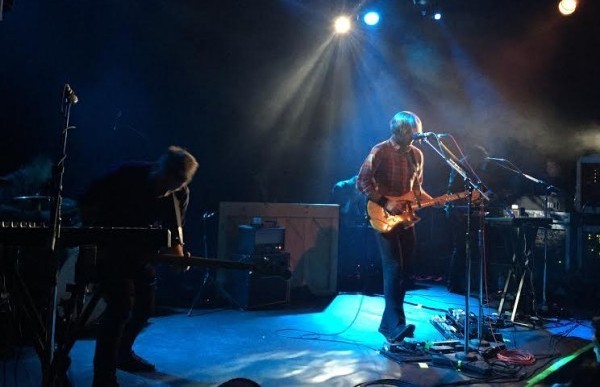 Music Hall of Williamsburg has been the location of several amazing shows that I’ve had the privilege to catch over the last three months, starting with Kimbra in early November, followed by Real Estate on the third night of Hanukkah in December (complete with an introduction from Saturday Night Live’s and friend of the band, Kyle Mooney), and culminating on a high note with a surprise show in late January by none other than Death Cab for Cutie. Ben Gibbard and his crew (sans Chris Walla, who departed from the band in September 2014) played to an intimate yet electric crowd full of long-time fans, and proceeded to perform what can easily be considered a set list of DCFC’s greatest hits.

Death Cab’s stop in Brooklyn was only announced two days prior to the show, on the same day their first single, “Black Sun,” was released in advance of their eighth studio album, entitled Kintsugi, which drops in late March. Concerns aired by some beforehand that the set would be comprised of mostly newer/upcoming material were quickly put to rest when Gibbard stepped on stage and behind a piano to begin the performance with the long version of Narrow Stairs’ “I Will Possess Your Heart.” They proceeded to cover nearly their entire discography over the next couple of hours (the lone exception being their debut LP, Something About Airplanes) while peppering in the first three tracks off of their upcoming album, “No Room In Frame,” “Black Sun,” and “The Ghosts of Beverly Drive” respectively.

As mentioned, their set did not leave anyone disappointed, as almost every hit Death Cab for Cutie song was performed to the unbridled joy of the 550 people in attendance. Leaving the stage after playing 18 songs, Gibbard returned to the stage by himself to encore “I Will Follow You Into The Dark,” only to be joined afterwards by the rest of the band to play three more songs, finishing with the epic classic “Transatlanticism,” which couldn’t have ended the evening any more perfectly. It was a magical night in a venue that rarely sees acts of that magnitude (for perspective, Death Cab for Cutie’s next NYC show will be on September 12th at Madison Square Garden), and it is easily the early frontrunner for the best show of 2015.

Opening the evening was the one-man show Say Hi (formerly Say Hi to Your Mom), fronted by Eric Elbogen. A Seattle native who also released his eighth studio album last year, Endless Wonder, Elbogen brought a quirky energy and somewhat jerky dance movements to his set, engaging the crowd desperate to see Death Cab for Cutie as best as he could. Frankly, he did a great job, taking time out in the middle of his set to answer questions from the crowd, a technique I’ve never seen during a show before. Trendier music fans might be able to wax poetic about knowing his music when his band had a longer name, but even those unfamiliar with Say Hi beforehand left Music Hall of Williamsburg impressed by what they experienced.

I was dumb not going to this.