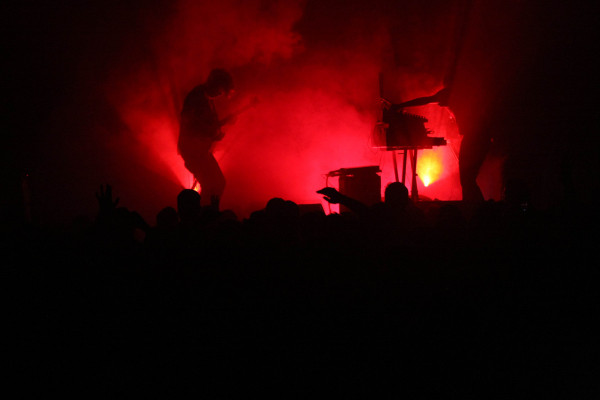 Darkside is the collaboration of synth maven Nicolas Jaar and guitarist David Harrington. The project, whose sound weaves between ambient and dance, popped on to the scene three years back with an eponymous EP, and gained further prominence last year with a debut LP, Psychic. The duo recently announced a split from the project, with tonight’s show their conclusion. The Brooklyn Masonic Temple was filled to capacity with those eager to send them off.

Darkside live is one of the best visual experiences I’ve ever gazed upon, made all the more sublime by its simplicity and abstract nature. The duo played with the venue dimmed, blasts of obscuring fog further masking and distorting them. Suddenly, blazing lights from the wall of lamps behind them would burst, dazzling the darkness-clad dancers. It was the opposite of eclipse; as a radiant heat surged through the venue, it was difficult to discern if it came from our sweating bodies or the midnight sun.

These visuals synced so well to the music gave the audio a truly epic aura. Their sounds takes a long time to warm up, and these cues that the dance beats have arrived were a tantric appeal. They departed their studio tracks frequently, snaking through uncharted territory at length, as the duo performed for nearly two hours. I will be sorry to see this project conclude. The night was billed as a “farewell, for now”, so maybe it won’t be more than a few occultations before Darkside is visible once more.

Valentin Stip opened the gig, putting out a quality mix of downtempo dance beats to sate the audience’s hunger.