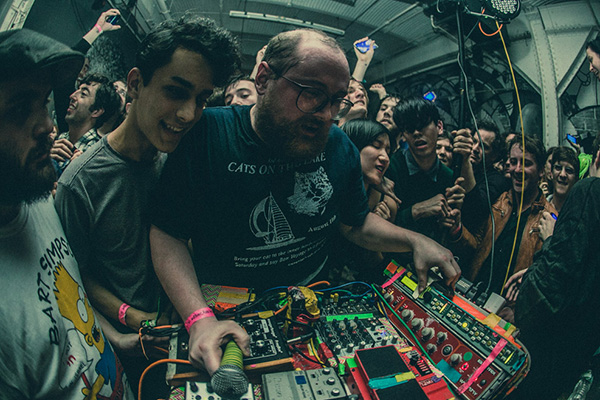 A down note to mark the advent of 2014 was the sudden closing of Brooklyn’s esteemed DIY venue-warehouse, 285 Kent. It has served the Williamsburg area well for years as a proving grounds for many local bands and haven for traveling oddities. With little notice besides a suddenly bare events calendar, the venue announced a weekend of solidly booked shows as a grand finale. I attended the second of four nights, headlined by electronic dance mastermind, Dan Deacon.

Before and after Dan Deacon’s midnight set stood an army of bands and djs. My fav of them was first on the bill, Tonsstartsbandht. They are brothers on guitar and drums and rock hard with a solid blend of psych and garage elements. The only other full band playing followed after them, Ava Luna. They’re a band of five with some complex pop vibes, utilizing multiple vocalists effectively. Dj Dog Dick played last before Deacon and gave us an earful of discordant electropop.

Dan Deacon is always awesome at cooking up a killer live show. Though he has a huge analog rig for his electronics, it’s his talents as an emcee that shine brightest. Even the most curmudgeonly of attendees dances at one of his shows. Though the close quarters of 285K made his organized dance routines a little harder to pull off, he still managed, hosting a dance off between him and Todd P, 285K’s owner. A fair sendoff for the man who made it all possible.

For the late crowd, electro-wizard Pictureplane was revealed as the special guest and followed Deacon. He, along with Dj Dust, closed out the night.