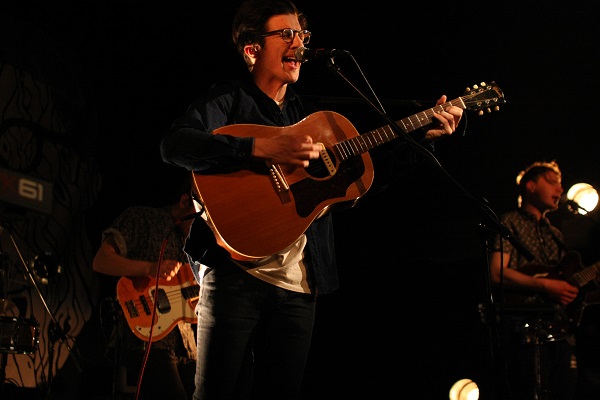 Dan Croll isn’t unaccustomed to selling out New York City shows. However, going from a sold out Mercury Lounge opening in 2013 to a sold out evening headlining at the Bowery Ballroom in 2014 is nothing to scoff at. The Newcastle native has found some niche fandom here in the US with his delightful, wholesome pop rock sound and songwriting capabilities. With some support from up and coming synth-based act, Panama Wedding, last Thursday night was a fun time.

Heading into the evening, I had only been familiar with Panama Wedding’s track, “All Of The People“. It is a fun chirpy track that doesn’t kill you by being fast-paced. The five-piece finished their set with it after a performing a slew of unheard material. Most of their tracks combined an upbeat electronic energy with 80s-style rhythm and percussion. It was almost like St. Lucia meets Peter Gabriel or Genesis. The New York City group should be on the verge of releasing more of their material and the band has some definite alternative breakout potential.

Having seen Dan Croll for the second year in a row, his stage presence has remained consistently strong. This time around, his band sported a new lineup and Croll was much more comfortable in front of everyone. You pick up on nothing but good vibes from him and his material. He just strikes me as a great guy who writes great music for great people. Before the night was over, Croll took someone’s phone and proceeded to take some selfie video of his entire band before returning the phone. We also sang “Happy Birthday” to another girl who was brought on stage. Dan Croll has certainly developed the likability factor, and his vocal range certainly makes the ladies swoon.

Having covered the vast majority of his debut LP, Sweet Disarray, most of the audience was singing along by the end of the show. His slow jams like “Thinkin Aboutchu” and “Home” were most enjoyable and he played it safe by performing current hit, “From Nowhere” as one of the encore tracks. He has yet to wrap up this leg of his North American tour and he actually returns to the Music Hall of Williamsburg in Brooklyn on June 15. It’s great to see him giving us so much love here in the US.