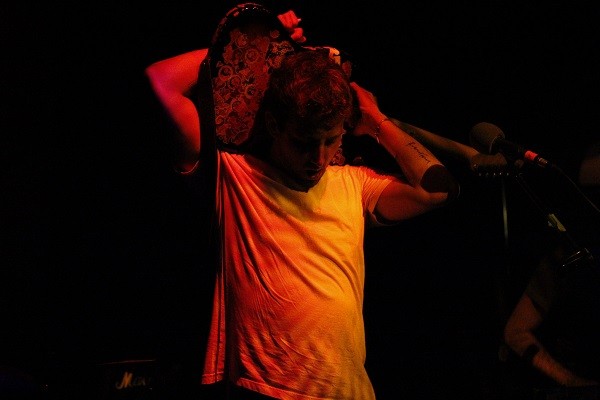 It is always great to see a strong headliner listed for the weekly free show at BAR- New Haven. That was the case last week when Staten Island based Cymbals Eat Guitars dropped by for a visit to kick off a tour in support of their new LP release.

The first billed opener was High Pop, a local CT garage rock outfit. They just put out a new album, Holy Smokes!, on August 22. We heard a variety of material from their catalog and it was a fuzzy affair. The coolest material they performed were the long winding tracks towards the back end of the set that had lengthy stretches of cool percussion and vocals.

Dead Gaze chimed in second with a more noise-driven approach. They worked with elements of shoegaze and grunge with a psychedelic twist that filled the completely filled the venue with sound successfully. Their set had BAR enveloped in a dark haze. It was great music to get lost in, to space to. Dead Gaze gave us a clean performance, but like High Pop, there wasn’t a ton that stood out in comparison to the night’s main showcase.

The only major attention-grabber of a performance of the night belonged to Cymbals Eat Guitars, led by guitarist/vocalist Joe D’Agostino’s obvious passion for performing. His animated approach was fun to watch and his throaty yet melodic vocals provided a distinct listening experience. The band gave us a preview of their fantastically complex release, LOSE, which came out on Barsuk Records on August 26.  “Warning” and “Chambers” were a pair of new tracks that the band teased leading up to the release, and the vocals and instrumentals were on point. Their growing emphasis on backing keyboards is a great added bonus as well. They sprinkled in some old material, but the upbeat nature of the new stuff was most enticing for me.

Have a look at a full photo set from the show.

Listen to “Chambers”, The Latest From Cymbals Eat Guitars