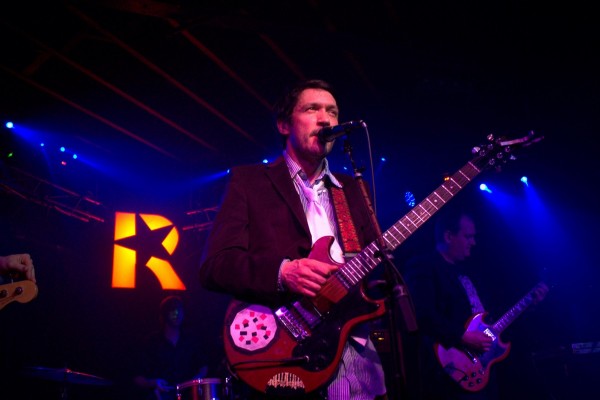 The nostalgic, emo-post hardcore band Cursive recently graced Long Island with its presence on March 13, 2015 at Revolution Bar & Music Hall to play to a beyond packed house following on the tails of a completely sold-out, three night NYC run. This tour being in support of the 2014 re-issue of their smash album, The Ugly Organ (2003). Tim Kasher walks out on stage and opens with “Sink to the Beat” and “Big Bang” and almost immediately the crowd is riveted, but more so by the surprise that was Gretta Cohn and her cello taking her seat onstage with her former band-mates after an almost ten year absence; rest assured, she didn’t miss a beat. Suddenly, the Ugly Organ intro begins playing speakers as Tim smirks back at the audience and says into the mic “It’s THAAAT time..” right before the band drops into the grinding “Some Red Handed Sleight of Hand” and almost immediately the crowd breaks into a mini pit complete with jumping and body surfing. The set was punctuated with essential banter and a cheeky cover of the 90s hit “Torn” (originally by Ednaswap.) The band eventually wrapped up its electric performance with “Sierra” and “Staying Alive.”

While the album, Ugly Organ is a three-act pseudo-melodrama that follows its main character, the Ugly Organist, through trials and tribulations in love and life. The Omaha-based band itself formed in the mid 90s with Kasher, Matt Maginn, and Steve Pedersen, all of Slowdown Virginia along with drummer Clint Schnase. In 2001, the band had a great thought to add cello accompaniment with the help of Gretta Cohn, who initially added the complimentary strings to their 2001 release Burst and Bloom. Then in 2003, they dropped their album The Ugly Organ (which is unarguably their most well-known piece to date) and the release of two other albums before mid-2005 when Gretta Cohn parted ways with Kasher and co. After that, Cursive remained as a four-piece.

For a band that has been predominantly labelled as “emo,” it quickly becomes obvious that this band, despite its bevy of fans yelling along to their favorite lyrics, presents itself with unconventional chord progressions and unique string arrangements in a way that could ever win over a listener that would not ordinarily form a personal attachment to it and its lyrics. If nothing else, Cursive has always taken an avant-garde approach to instrumentals that could raise an eyebrow, but ends up in a beautiful discord of sound that ultimately meshes on so many levels. For me, Ugly Organ is an emblazoned memory of being 17  and about to graduate from high school. It spoke to myself and many others of my generation, breaking barriers, exploring new territory a veritable ‘X-marks-the-spot, of I was here and this is where I’m going.’

Playing along with Cursive that night were two other bands, the latter of which was Beach Slang. I’ve had the previous pleasure of first seeing Beach Slang perform in Sayville in the summer of 2014 before they became the super-punk group they are now considered. Beach Slang, hailing from Philadelphia, PA, is fronted by James Snyder, formally of the PA punk group, Weston, and have garnered a bit of comparison to the well known Goo Goo Dolls. The most impressive thing was that even though opening for a much bigger band, Beach Slang STILL managed to fill the room with enough people who were able to sing along loud for the everyone to hear. That night, they played virtually everything from their two 2014 EPs and some new tracks (maybe from their upcoming debut LP on Polyvinyl?) All of them sounded completely awesome. Along with their killer original material, they paid homage to some of their musical influences with a few covers, one of which was “Love My Way” by the Psychedelic Furs.

Opening the show was a Texas duo set from John Congleton & The Night Nite. Congleton is actually best known as the producer for many great bands including St. Vincent, The Mountain Goats, and Swans. Similar in sound to The Mountain Goats, I’d classify it as a darker, yet dreamy mix of synth/rock with its raw & discordant electric guitar fill and darker harmonic minor keyboard adds.