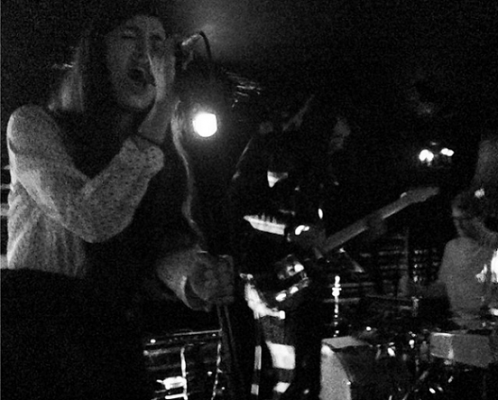 The Space in Hamden, CT played host to a high profile show on Wednesday February 19. Indie pop darlings, Cults, dropped by to play for a packed crowd in support of their sophomore full-length release, Static. Tour buddies, Mood Rings, opened the show to help them close out this particular branch of a North American tour.

Atlanta’s Mood Rings showcased some new tracks while performing selections from their 2013 LP, VPI Harmony. The band’s live sound offers up a nod to shoegaze fans while blurring the lines between genres ranging from post-punk to dream pop. It was a fitting way to lead up to Cults. I can see why they’ve been tour partners for months.

Whether in the studio or in a live setting, the vocal prowess of Cults’ Madeline Follin is superb. The charm of the band begins and ends with Follin’s alluring stage presence. On stage, her voice is a bright ray of light shining through fuzzy synths and delightfully lo-fi beats. After opening with “High Road” and gradually warming up, Follin hit her vocal stride for the evening. Her range reached the impressively high levels in “Almost Forever” that you experience on Static, a definite feat for a live performance.

Static includes a handful of powerhouse tracks. “I Could Hardly Make You Mine” was a major crowd-pleaser. My love for “Were Before” was affirmed as the live rendition was enthralling and didn’t lose out on the same buildup that I enjoyed from the studio recording. They served up a satisfying encore that fulfilled audience demands for their older commercial classic “Go Outside”, and sure-to-be single “Keep Your Head Up”.