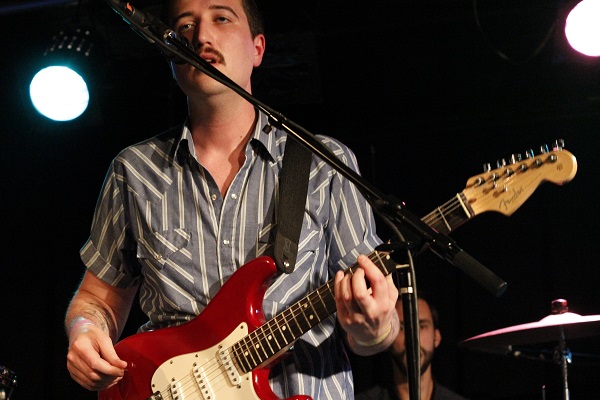 Picking up where we left off yesterday, here is the continued coverage of CT’s Fauxchella 2014. Have a look out at the updated full photo album here, and check back tomorrow for the final portion of our coverage.

Experimental math rockers, Langosta, hail from Hartford, CT. Over the past year, the band has sized down from four to three members. Their material was full of grit in the live setting. Without any crazy bells and whistles, the instrumentals were mainly the focal point.

Toronto trio, Parallels, provided Fauxchella with its biggest treatment of synthpop for the day. With sweet vocals from Holly Dodson, the band appeals to new wave junkies like myself, and fans of electronic outfits like CHVRCHES. Parallels packs in a bit more aggression with Holly’s brother Nick Dodson wailing away on drums. It is a great alternative to a drum machine that a band like these guys oft rely on.

There was literally no standing room in The Outer Space when I somehow wriggled my way in for some of the Political Animals set. Local to New Haven, they operate with Sotorious Fedeli as MC. He is surrounded by his live DJ, a bassist and drummer, giving them plenty of depth to set them apart from being just another hip-hop outfit.

Fake Babies explores the darkest, most psychedelic corners of the soul genre. The New Haven five-piece is driven by a bevy of influences and the output is considered dirty soul. They’ll be performing again this week on May 14 for BAR’s free show of the week, opening for London electronic rockers, Breton.

Doing some of the most traveling out of all the featured bands, Bad Veins came all the way from Ohio. Dressed in his usual military garb, vocalist/guitarist Benjamin Davis embraces the zany for his live shows. He sang into a telephone to offer a unique sound, and used his reel-to-reel, named Irene, to provide backing tracks. It was the most fascinating on-stage setup I saw all day. The end result is a friendly, upbeat brand of indie rock.

I tend to recommend Boston-based Bearstronaut to anyone who enjoys music. They pleasured the Ballroom at the Outer Space with their synthy rock that does nothing but encourage sweet dance moves. Dave Martineau’s (pictured) vocals are very clear and are just asking for you to sing along with them. With infectious beats and the ability to ignite dance euphoria,  Bearstronaut has headliner written all over them, especially if they can take their current momentum and churn out a full LP.

Brooklyn Trio Wonderbreed Releases New Video, “Who Is Your Dad”

Matt, your blog kills. you take great photos and you do great write ups. keep it up my dude.