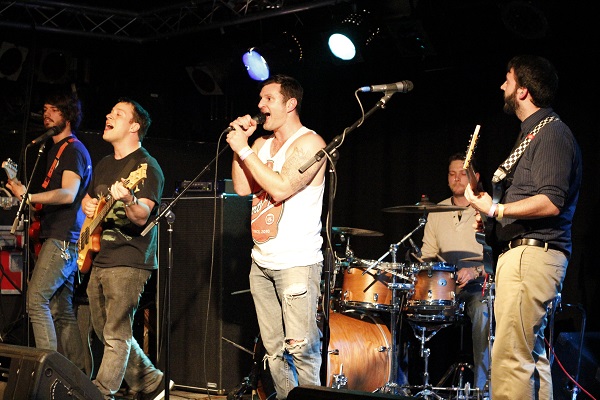 Being from Connecticut, it isn’t hard to feel a bit displaced from the whole music scene, considering that we’re next door neighbors to New York City and all. But for the third year in a row now, CT’s Fauxchella provided the remedy. Saturday May 3 brought over 30 local and regional acts together in Hamden, CT to perform eight hours worth of sets. Festival creator John Flynn joined forces in sponsorship with Manic Productions, Sloppy Seconds, and The Needle Drop to assemble their beefiest lineup ever.

The artists covered everything from hip-hop to punk to electronic rock, performing on stages located in The Space, The Outer Space, the patio at The Outer Space, and The Ballroom at The Outer Space.  Very regrettably, I wasn’t able to view the set for every excellent act that performed, but here are some thoughts and photos of everything I was able to squeeze in throughout the day.

Performing a loosey-goosey sort of garage rock, The Dustbusters seemed like one of the more younger groups of the day. Guitarists Anthony Rossi and Thomas Stringer would keep things fresh throughout the set by alternating vocals. I’d like to hear more from them in the future.

I was able to briefly catch a bit of Frank Viele‘s outdoor set. Viele is the recipient of the 2014 New England Music Awards Live Act of the Year with his soul-infused acoustic funk style.

I’ve touched on Brooklyn’s Wonderbreed several times before and I finally was able to see a live set. That same energy was all the more present on stage. It was like being hit with a wall of hard punk. In the early afternoon festival setting, it was hard to completely pack the house for these guys, but I’d love to catch them again in a smaller setting with tons more spectators.

Experimental duo, Ports of Spain out of New Haven, play plenty of shows over here in CT. Ilya Gitelman and Sam Carlson create catchy, palatable beats. Their simplistic appeal centers around how full they sound, just between to the two of them with their guitar and drums.

Fauxchella founding father John Flynn’s work doesn’t just end with the organization of the event. He is the frontman for New Haven band, The Morning On Fire (pictured). Flynn provides lead guitar, vocals, and theatrics in general for the five-piece’s sporadic, jam/soul-driven rock and roll.

I only managed to catch a couple of tracks from Hartford-based Two Humans. This was the first band I saw throughout the day that began to get the antsy young audience in The Space to get moving, so I applaud them for that.

Wess Meets West is a mainstay here in CT. Their instrumentals shoulder the weight, and their material sure is powerful. They perform really cool experimental rock. In a live setting, their spiraling post-rock electricity is what envelopes you the most. See them on July 16 when they perform a free show at BAR- New Haven.

The Morning On Fire