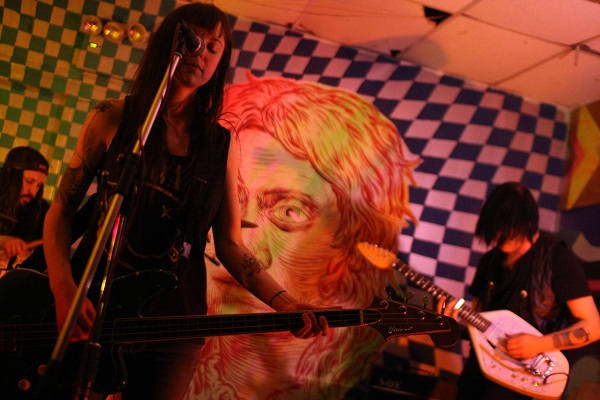 If I had to choose one word to describe Creepoid’s music, I’d pick “desolate”. The Philadelphia rock group’s music reminds me of the kind of stuff one could hear during the nadir of a modern Western. The group put out their second full length this year along with an EP, Wet, both of which were sold at the show. The EP has a wild set of etchings on its B-side, which are doubly cool hand poured if subscribed to Graveface’s record club.

Creepoid live spent no time on introductions and went straight into their music. They played a set near forty minutes in length that eclipsed the midnight hour. The four members each meticulously playing their instruments, absorbed in their own worlds, made for a sight to see. Songs like “Baptism” and “Wet Bread” really highlight the slowness and strength that is the heartbeat of their sound. It has enraptured me as of late and translates seamlessly to a live setting.

The night was more than just Creepoid though, three other rock bands each put in unique and earnest efforts of their own. The Chickenhawks, up first, were a trio that reminisced of rockabilly’s better times. They were followed by Florida, also a trio, whose performance was abrasive and weird in the best ways possible. The last supporting act was Alex G, a group of youngsters with a good take on the modern emo sound. All featured vocals, scant electronics, and full percussion.