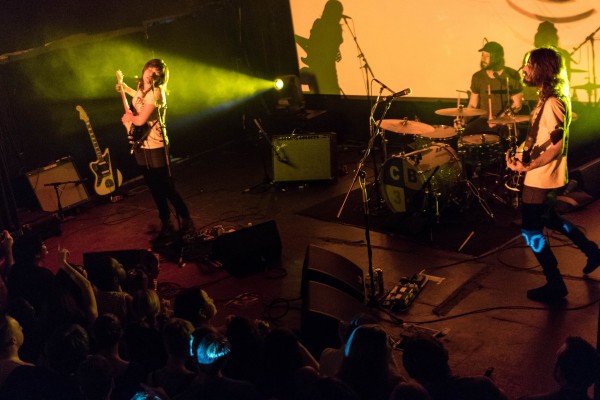 Melbournian rock sensation Courtney Barnett has been making waves here ever since she popped up on NYC’s radar during CMJ 2013. Recently, she released her debut album, Sometimes I Sit & Think and Sometimes I Just Sit to justified, rave reviews. She came to play three nights here at Bowery, all of which quickly sold out. She returns once more on July 22nd at Terminal 5, buttressed by Speedy Ortiz & Torres.

Relatable indie rock, delivered deadpan, is the name of her game and she does it frighteningly well. Her band this tour are billed the CB3, a trio with an obvious sense of chemistry and camaraderie. There was tons of energy, most easily made visible by some wild hair tossing. The set was accompanied by meandering visuals of a psychedelic nature. The audience hit a brief fervor during their hit single, “Pedestrian at Best“, where a mosh pit formed as it closed out the main set.

Chastity Belt & Darren Hanlon opened all three gigs. Indie rockers who court down to earth vibes like in Barnett’s music might also find some resonance with Chastity Belt and their Time to Go Home album, while Darren Hanlon wooed the audience with his repertoire of witty folk songs.