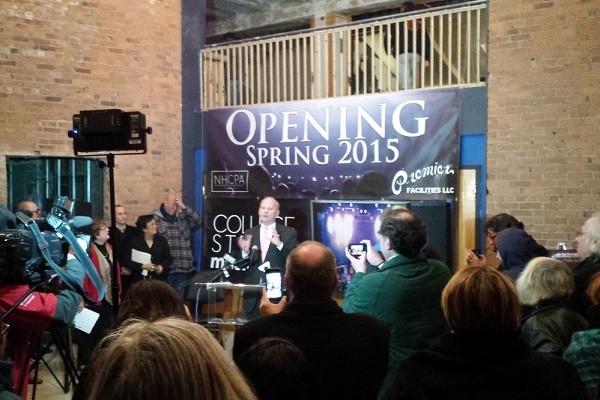 The future of the southern Connecticut music scene received a very promising boost on Wednesday. New Haven Mayor Toni Harp led a press conference yesterday announcing the opening of the College Street Music Hall, across the street from the historic Shubert Theater. The location began as a movie house all the way back in the 1920s and was also home to some of New Haven’s first live music. It has an extensive history as the Roger Sherman Theater as well The Palace Theatre, which played host to the likes of many artists ranging from B.B. King to Bob Dylan, to Sonic Youth, and more.

Located on College Street in New Haven, the venue is situated perfectly in the heart of the city’s nightlife. In close proximity to the New Haven Metro North station, Yale University campus, and a strong club scene, the College Street Music Hall should continue generate an influx of concertgoers, tourists, and more. This is a call to action to address the surge in demand for live music in the area.

Premier Concerts, based out of Waterbury, will be managing the venue in cooperation with Manic Productions to bring in acts from all walks of the music scene in an effort to satisfy the musical interests of everyone from millienials to baby boomers. With a max capacity of 2000, the Music Hall will attract bigger names to come perform in a city that is a growing cultural hub in Connecticut.  The capacity is flexible and can be set up for seated  shows and cabaret type events with room for as little as 650 at the other end of the spectrum. Operating many nights a week, we’ll see a wide variety of events ranging from concerts to comedy shows and whatever else is imaginable.

Premier’s President, Keith Mahler, said it best: “this is the right venue in the right market at the right time.” The booking process is already underway, and with the venue opening in the Spring this year, news of what kind of shows can be seen in the infantile stages of the music hall could surface very soon.