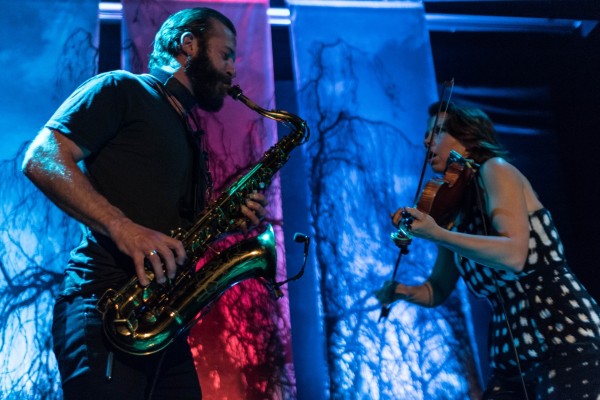 Two Canadian musicians of notable renown recently joined forces for a powerful experimental record, Never Were the Way She Was. The Actors? Colin Stetson, wielding several saxophones, and Sarah Neufeld, a renowned violinist. If you’ve seen Arcade Fire live chances are you caught one or both of them on stage. The two of them are active contributors to Constellation Records, which serves a lot of Canada’s most artful releases orbiting around indie rock.

The sounds of Never Were the Way She Was err towards creating a desolate, hostile soundscape, which its album art and compelling music video for “The Rest of Us” highlight. There was little merriment but studious intent or reverie may define the moods of my peers witnessing it live. This is a record that is really surprising for its efficacy with only two types of instruments (three if you count Neufeld’s distant, haunting vocalizations). Stetson’s use of saxophones for percussion was impressive and unorthodox to me in particular; listening at home, I absolutely figured it was done with drums.

The two played a set navigating the album’s length, including a solo jaunt from each. A quick encore followed, dubbed by Neufeld as a “lullaby” to send everyone off with. Fans interested in witnessing either’s music or presence again can check out Modo Yoga, which is soon to be opening a location in Williamsburg across from Nitehawk Cinemas. The hot yoga studio is deeply appreciated by yours truly for its monthly classes that source musicians like Stetson and Neufeld (who is a part owner) to innovate ambient sounds live for their devotees. Proceeds for those events typically go to a charity the studio is championing.

Ryan Sawyer has been touring with Neufeld & Stetson supporting their shows across its length, now concluded. The Brooklyn drummer and lone wolf dabbles well on the abstract side, introducing himself waving a tube and creating sounds with it before settling down at his kit for a collection of songs.