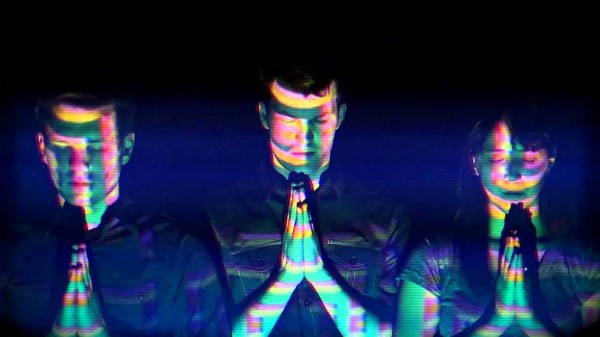 CMJ 2014 fast approaches (October 21st-26th), and to properly note the occasion I’ve spent some time making a mix of my most anticipated artists scheduled to make appearances. The title of the playlist is “Night Falls”, curated to sound dark, chill and grimy. Look below for each artist’s listed appearances current as of 10/8/2014. I will attempt to keep this updated as more shows are announced.

In addition, we are giving away tickets to about half the acts on this bill that will be making appearances at Glasslands Gallery. Details on how to enter are at the bottom.

Faded Paper Figures – The most important single CMJ appearance in this humble blog’s opinion. FPF is a synthpop trio from LA who just released their fourth album, Relics, and are doing a rare tour in support of it. This will also be their first show here in NYC ever. Our CT readers can also catch them at Yale on the 19th (free w/ required RSVP).

The Wytches – A trio out of Brighton, England they make a demented form of surf rock and released their debut, Annabel Dream Reader, recently via Partisan. I saw them as they made their NYC debut in July and really dig their edge. We featured them in our most recent episode of Beet Box Radio.

Casual Sex – An interesting band also hailing from the UK, Casual Sex are known for a sleazy style of indie rock that you can dance to. They were here last year supporting Franz Ferdinand and have The Bastard Beat EP to their name.

Wampire – I just love this Portland band’s slightly weird take on rock music. Their second album, Bazaar, just came out and venturing out to see them will likely result in a bevy of new material if you were familiar with last year’s Curiosities.

The Kite String Tangle – An electronic pop project by Danny Harley out of Australia, TKST made huge waves with a high score in the Triple J Hot 100. His melancholy single, “Given the Chance”, scored 19th in the heated competition. Hearing the translation to live and a full set is a priority.

PINS – A tough rock group of girls from Manchester, we saw them way back in March and they return again this CMJ. Their track, “Girls Like Us”, graced our first episode of Beet Box Radio.

Happyness – A rock trio out of London, they have a downtempo sound that just sets me at ease. They’ve got two releases out this year, an album and EP, and are making a slew of appearances in NYC for CMJ.

King Gizzard & The Lizard Wizard – An icky named and sounding troupe of psych rockers out of Melbourne. They’ve got something special though in their 2014 album, Oddments. They’ve played a few shows here recently and will be back for a couple more during this CMJ.

Blue Hawaii – Chill and melodic electronic pop out of Montreal. The duo had plenty of success with last year’s Untogether. They’ll likely be debuting some new material this time around and are a quality choice for downtempo dance.

Brothertiger – A Brooklyn synth project pioneered by John Jagos we dig here. They were actually our first live review on Neat Beet this year! We celebrated his music for being relaxing and immersive on record that bursts into energetic dance with a live band backing.

Moon Duo – A wild and taciturn psych rock duo out of Portland who just put out a new album, Live in Ravenna. I considered them one of my highlights of ACL 2012 and am interested to see how their sound has developed in two years.

EMEFE – I love EMEFE. The jazz troupe is local to NYC and their music is really catchy. I’ve seen them only once and it was a wild dance party. They’ll be playing a lone show at Rockwood and I would argue for it being a contender for the most fun you can have at any individual CMJ appearance this year.

Young Magic – A curious electronic group from Brooklyn that straddles a weird land between atmosphere and dance. I’ve seen them several times, but not since their new record, Breathing Statues. In the past, they have had some pretty convincing and weird visuals.

The Marshmallow Ghosts – An odd and creepy synth band that features Ryan Graveface of Graveface Records & Black Moth Super Rainbow. The group rarely emerges for any live activity, but since Halloween is right around the corner, the season is right. The band hasn’t played here since opening for BMSR on tour three years past and the Graveface Showcase will be their only performance.

Creepoid – Another of my favorite bands that really have hit a stride this year. Creepoid, who now reside in Savannah, Georgia, released a self-titled album before aligning with Graveface for an EP this year. They’ve got a dark and coarse rock sound and recently finished tours with Against Me! and Balance & Composure.

We have got a pair of tickets to give away for each CMJ gig at Glasslands mentioned above (10/21: Wampire, Casual Sex | 10/22: The Wytches, Happyness | 10/24: Blue Hawaii | 10/25: The Kite String Tangle) and are offering three different ways to enter yourself below. The contest is open until 6 PM on the 15th.