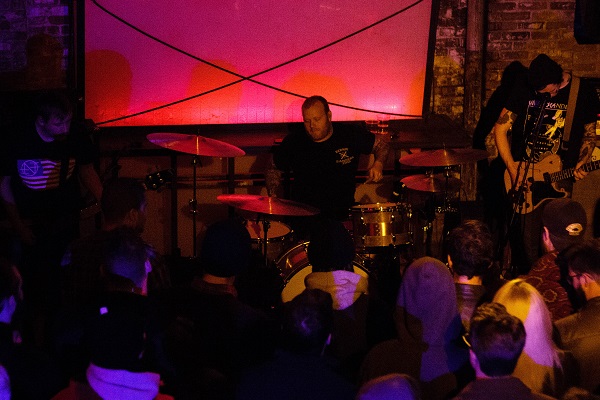 After several past encounters with Illinois band Cloakroom, we finally got to see them in person in Connecticut. It made for a noisy New Haven evening.

Local grungy garage trio Bilge Rat opened the show with material from their debut EP Townie Garbage that they released last Friday. Moody and loud, the band features Thom Hart of The Sleep Cozies. Listen to the affectionately named “Jon Puked Last Night” to get a feel for what these guys have to offer.

Baltimore’s Wildhoney is a fuzzy fusion of sorts. A mixture of shoegaze, punk, and noise pop, the band sounds like My Bloody Valentine colliding with Cocteau Twins. Their debut full length, Sleep Through It, was released in 2015 and takes you on a 90s nostalgia trip with tracks like “Seventeen” and “Owe You Nothing”. Their noisy pop roots are noticeably strong in the live setting.

Cloakroom gained some attention last year with the release of their Further Out LP. You may actually remember us seeing them live in 2014 and also featuring “Starchild Skull” in an early 2015 episode of Beet Box Radio. This particular show at BAR-New Haven, where the acoustics are just fair, gave us a good sense of how jarringly loud Cloakroom is. Their set was an eardrum-destroying slowcore/stoner rock assault. But they sounded good and ultimately generated some moshing energy in the audience, a rarity for a free show on a Wednesday night in New Haven.