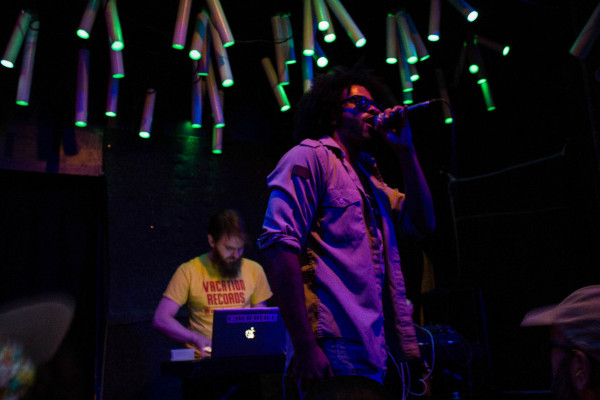 Sunday night we got some dope beats from LA’s own clipping.. This experimental hip hop group, consisting of MC Daveed Diggs, William Hutson, and Jonathan Snipes (who also composes film music), has drawn comparisons to the likes of Death Grips. Abrasive and raw industrial noise with a good amount of gritty rap deliveries layered on top. The group likes to consider themselves a rap group (not noise-rap or industrial-rap) though I could see anyone arguing that their sound adequately fits in those sub genres.

Their debut album midcity was self released in 2013 to warm reception despite little promotion. It was followed by CLPPNG in June of this year. Both albums are full of harsh sounds with the sort of interesting and abrasive experimental beats that Dr. Dre would approve of. They call it a traditional experimentation within the hip hop genre, and not a reaction against the traditional sound of this genre. This makes them stand out and their live performance truly captures their passion for rapping and experimenting with clangs, drops, and heavy bass beats.