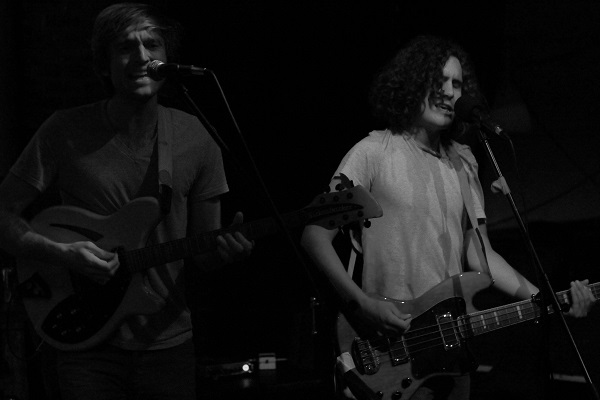 July 23 made for one of the more cheery shows I’ve been to at BAR all year. Having relocated to Southern California, Cheers Elephant brought themselves to CT radiating with Californian pop rock flair. They were joined by Wallingford, CT band Dance, Charlatan! and New York City’s Junior Prom.

This was the second time I caught up with Dance, Charlatan! at BAR this year. The first time was back in January, prior to the release of their Bouquet EP. What was further established this time around was their live consistency. The enjoyment they get out of performing was projected upon us viewers. Most of their newer material was played, along with a selection of some of their more aggressive older material. It was great to finally be able to sway to a live rendition of “Nickels”.

The band in the billing that has some of the most national exposure was duo, Junior Prom. They slot right into an alternative dance rock niche, having been awarded satellite radio play with the insanely catchy tune in “Sheila Put The Knife Down”. Leave it to just these two guys to put together the most compelling set of the night with songs that are impossible to not get moving to. Mark Solomich and Erik Ratensperger would spice things up with some “baby-making” transition music between tracks and simply possessed a subtle overall entertaining quality.

Providing the most chill beats of the night was the headliner, Cheers Elephant. The biggest crowd-pleaser relied on clean cut pop rock riffs and melodies that are a safe bet when it comes to making additions to your sounds of summer collection. Lead vocalist Derek Krzywicki offered up most of the showmanship, singing through a megaphone at one point early in the set. The tandem guitar work between him and Jordan del Rosario also sounded great. The buildup on tracks like “Leaves” kept the audience completely engaged throughout the entirety of their fun set.