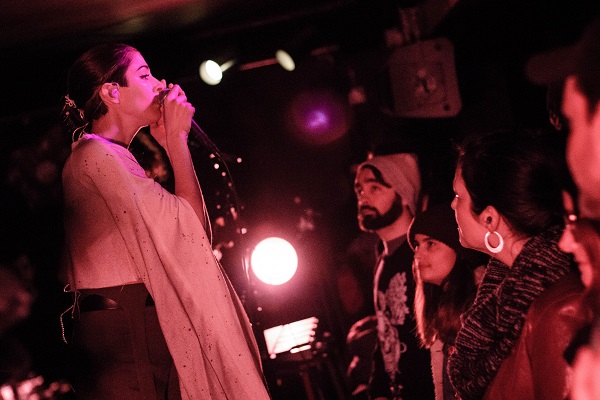 As soon as Chairlift announced that their set would primarily feature new tunes from their third studio album Moth, you could just feel the entire room at The Space become collectively stoked. The timing of this intimate Hamden, CT show was actually came just hours before the release of the new LP and vocalist Caroline Polachek gave us a countdown of sorts throughout the set. They performed their set bathed in a fiery ambiance generated by portable red lights set up sidestage, the only source of illumination.

This was the first time that the room was hearing most of the Moth tracks, and the general feeling seemed to be total satisfaction. We were introduced to an urban mood with new songs like “Polymorphing” and “Ottawa to Osaka”. Their saxophonist brought out a new jazzy element that paired nicely with their synths and insanely catchy samples. The hyped pre-release singles “Ch-Ching“, “Romeo” and “Moth to the Flame” delivered the energy we had been anticipating all January. The band even tossed in a few classics in “Bruises” and “Sidewalk Safari” for good measure.

Far and away, the biggest crowd-pleaser of the evening may have been Chairlift’s all new “Show U Off”, one of the more pop-driven tracks off Moth. It showcases Polachek’s range, some slick guitar hooks in place of the usual samples, and an amazing breakdown towards the tail end of the song that audibly got the fans amped up and dancing. What we have here is Caroline and bandmate Patrick Wimberly expanding their repertoire and opening up to new styles of sound while still maintaining their identity with some signature sampling. They’ve assembled a strong touring group as well that should see plenty of success on the road.

Local, unconventionally-named, experimental DJ THE//MOON was the opener for the evening. Dropping some hypnotic, eerie beats on a dark stage was an interesting way to kick off and indie pop show, but ultimately led into Chairlift’s set well.