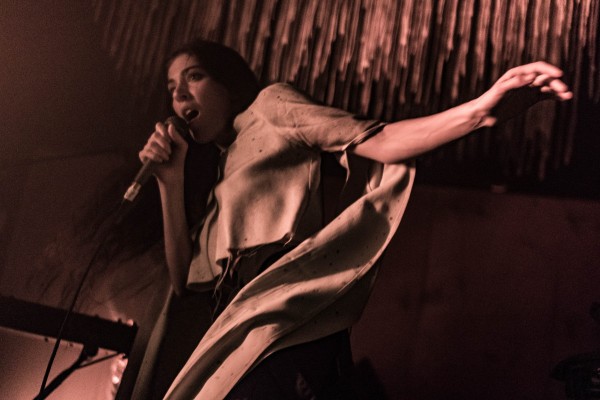 Amid the sadness of Cameo Gallery’s closure, I found joy in one of the best bills of local stars around. Mr Twin Sister & Ava Luna, both of whom we’ve photographed headlining sold out gigs on their own merits, announced a show together with a surprise guest to bid Cameo a proper goodbye. Chairlift’s identity was kept relatively secret (a leading rumor was Porches) and floored me when I found out; prior to tonight, Chairlift had been off the radar the past couple years. That is changing rapidly. Chairlift would also announce a second show the next night, travel down to Mexico on the weekend, and are booked already for Firefly 2016.

At this show, Chairlift announced their new album, Moth, due out in January, and played us a set of entirely new material, minus “Bruises”. I liked everything I heard from it, and with Caroline Polachek in motion like flowing water through the phosphorescent fog, I was transfixed. I cannot wait to listen to this record in full. Chairlift’s current live iteration is a quartet featuring brass, some strings, and percussion.

On the Ava Luna front, there’s not much news to report, they’ve spent much of the year aggressively touring their art rock wonder, Infinite House. I do get a kick luring people to their shows and having them try to guess what they’re going to sound like. Becca Kauffman’s wardrobe and gestures channelling Stop Making Sense-era David Byrne may or may not have been a red herring.

Mr. Twin Sister were also very active this year, touring some of the US and playing myriad venues throughout NYC including: opening for Sylvan Esso at Terminal 5, Ridgewood’s Onderdonk House & DUMBO’s Archway. Tonight they played a set that was all over the place, including more than a few unfamiliar songs; we can probably expect a followup album next year from them. I am also really happy to hear 2010’s dream pop swooner, “Lady Daydream,” in the lineup again. And if you’re wondering what Andrea Estella’s cosplay tonight is from, refer to Video Girl Ai.

We will continue our coverage of Cameo Gallery later this week with a photo gallery from the final live show, which was headlined by Caveman.