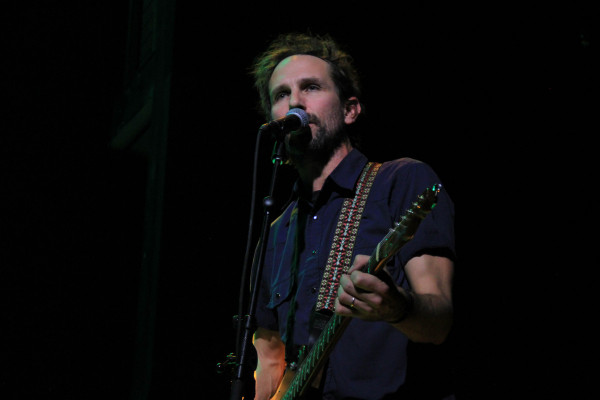 Just off the water of the east river and a few steps down the block from the Brooklyn Brewery you’ll find Rough Trade, Williamsburg’s premiere record store/concert venue hybrid. On the night of 12/11, I was lucky enough to attend a stop of the Centro-Matic farewell tour there, with guests Elephant Micah. The venue itself is constructed from repurposed shipping crates that seemed to be left over from the industrial trade era in the area. This setting seemed to be a great fit acoustically and intimately for the bands from Texas and North Carolina who made themselves right at home with the NYC crowd.

If you want to truly get into the mindset of Elephant Micah take a white knuckle drive down I-90 down to Raleigh, North Carolina. By white knuckle, I mean set the cruise to 35 mph and watch the rolling hills of the east coast appear on the horizon and fade in the rear view.

Life is something people in New York tend to rush through, and as cliché as that phrase has become, it is never more clearly presented to us then through the music and lyrics of Joseph O’Connell (singer & lead guitar). It’s not about a need to triumph or conquer in this life, nor is it about falling into the depths of despair. It’s about taking time to step back and enjoy the ride. The real cliché for Elephant Micah is describing life in such grandiose terms.

Joseph’s guitar has a tremendously warm and full sound that does not pierce or try to scream over the band. He manages to find the best arrangements to build and sustain the soundscape with a single strike of the pick. Delicate and strong, these words don’t always find their way together. But just like his subject matter, these songs seem to be light as a feather and can withstand a hurricane.

The more percussion involved songs invoke a Civil War-era amble through the fields of the South while lyrically referencing 21st century hardships. These battles fought, won or lost seem to weigh heavy on the minds of every lyrical subject as they travel through their sonic landscape.

Don’t mistake slow for sad. These songs are contemplative, deep and grow with a delicate emotion that doesn’t always reach fruition.  The experience in songwriting shines through these beautiful pieces and their live performance leaves me wanting more of the same.

Many bands that originate in the NYC area seem to have an interesting quality of atmosphere and pace that grows from the oceanic climate of this region. It’s a trait that seems to go unnoticed until a band of power and profoundly different origins comes to play in our town. Bands from the heartland in particular seem to breathe a more earthy, grassroots tone and feel that mimic either the long meandering rides across flat landscapes or the toughness necessary to dig your boots into the ground. In the late 90s’ through the early 2000s’, bands that bridged the line between folk, rock and a touch of country found a nitch in the post grunge void. The Indie Americana band Centro-Matic have been building an empire in this space for the better part of the last three decades.

Unfortunately, like all great empires, the close can be one of the hardest parts. After ten full length studio albums, a slew of EPs, and countless tours, Centro-Matic embarked on a lengthy farewell tour to leave their lasting imprint on the American landscape. I was able to catch them in my element, the back of house stage at Rough Trade, playing one of their final legs.

The bands sound was as crisp and clean as ever, with their collective harmony only being surpassed by the effortless synchronization that can only come with playing together for so many years. The set seemed to grow as the band continued the set, threading in old classics with newer hits that brought the crowd to points of chanting sing-alongs and ambient quiet tones. The venue size fit the bands and their set list perfectly.

To see such a prolific band leave the stage for one of the last times was not easy for anyone in the crowd, but I feel privileged to have seen them live and in person at all. I recommend picking up one of their albums for those of you who have not heard them, and for those who have, I hope you can catch them on one of their remaining gigs. They wont be here for much longer, but they will live on forever.