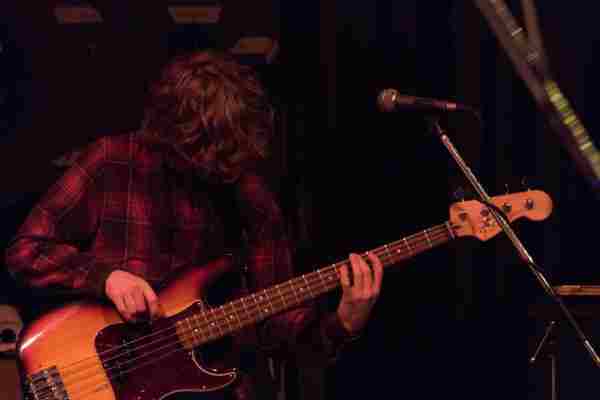 Getting caught in a frigid windstorm last Friday night led me to seek solace at Shea Stadium. In turn, I was rewarded with a bill of energetic, experimental bands. All of the artists featured tonight really embody the local DIY scene. Apologies to Voice Coils, whom I missed.

First for me on the night was Cloud Becomes Your Hand, a rhythmic and hypnotic quintet of electronica jolted pop sounds, all the while riding a knife’s edge against total discord. Visually, the group is rather detached, focused purely on their music, perhaps most noticably in their MIDI operator/mallet man, Sam Sowryda, and his interpretative dance moves. Also, maybe you recognize their drummer, Booker Stardrum, from our coverage of Wins earlier in January; he’s a busy guy! CBYH returns to Shea Stadium on the 13th backing up Leapling, and I’m really hoping they have more of their specialized magnets on sale that night. (wink, wink)

Zula have been really fun to follow around lately, and were my anchor for dropping in tonight. The group’s been getting really cohesive as they prep for a second album in the midst of an onslaught of shows. They played what.. fifty gigs last year? Tonight, the group celebrated Noga Shefi’s one year anniversary with the group as well as Pablo Eluchans’ birthday. We’ll be seeing them again in March, at the latest, with their opening slot at Webster Hall for Deerhoof on March 28th.

Listen to maybe the first thirty seconds of Celestial Shore‘s recent record, Enter Ghost, and you’ll be sold for the full thirty minutes. The trio’s work features a lot of complicated and furious guitar sounds buttressed by lofty vocals. The group talked about returning to hibernate following this one-off, but they are planning a European tour come Summer.