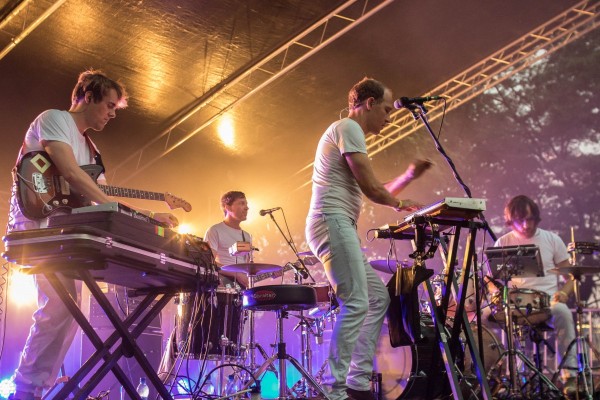 Caribou is well established among electronica devotees, respected for his long-tenure of danceable, oft-gloomy music. He came roaring back into focus with last year’s Our Love [Merge.] and played a couple of sold out shows at Webster Hall in November supporting the album. Summerstage, celebrating its 30th anniversary with a wider than ever spread of shows, set up a free show featuring his first performance here since at the East River Promenade, betwixt the Manhattan and Williamsburg bridges. Ghostly beats and flashing lights engulfed the (very)packed locale.

Live, Caribou becomes a quartet, with drums and guitars well represented, making for a strong translation to the stage. Those close enough to the stage got to see Caribou take to the drum kit as well. We heard most of Our Love, which was one of the most complete electronic dance records of last year, as well as “Odessa” & “Sun,” my two favorites off his 2010 album, Swim. Don’t be fooled by his melancholic sound, his music incites much motion; The Promenade was a’bumpin’.

The oh-so-groovy Sinkane opened. It’s been about two years since I’ve seen him, my other encounter being a headline set at my personal final visit to Maxwells in Hoboken back in 2013. Since then he’s put out a new record, Mean Love, [on DFA] which is a powerful addendum to his discography, and to see him play a stage replete with a full cast and crew including a wind trio and back up vocalists was an impressive development. His chiller music and earlier time slot had the crowd blissed out. I’ve no reason not to expect to cross paths again with him soon and find his prestige risen all the higher.