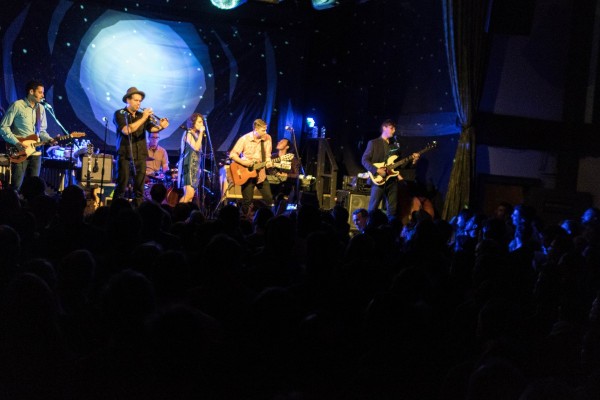 Hailing from Arizona is Calexico, who hold an indie rock presence ripe with the sounds and visuals of the desert biome. The group released their ninth album recently, Edge of the Sun, on ANTI- (maybe you heard “Falling from the Sky” in our last episode of Beet Box Radio?) They also launched a tour in support of it that hit Bowery Ballroom for two sold out nights last week.

What’s most impactful from a Calexico show is the plethora of instruments and the beauty of them all played together. Calexico live is seven members and many more instruments, plus Gaby Moreno, who has multiple features on the new album. Pretty much the entire band shares singing duties as well, though lead (and emceeing) still fell most to guitarist Joey Burns, who along with drummer John Convertino have been with the band since its inception. I especially loved the juxtaposition of the band’s members with the piercing, illuminated backdrop of the desert moon that set’s the band’s aesthetic so well.

The aforementioned songstress, Gaby Moreno, opened both nights with a sweet set of English / Spanish tunes, wooing the audience with her charm and musicianship. Tonight was her last night on tour as Calexico heads to Europe and later the Western US, and like how she joined Calexico, some of the band’s members came out to play with her on her 2012 song, “Ave Que Emigra.” She’ll be back here on July 17th with a free acoustic set out by the Lincoln Center, which should compliment her style nicely.