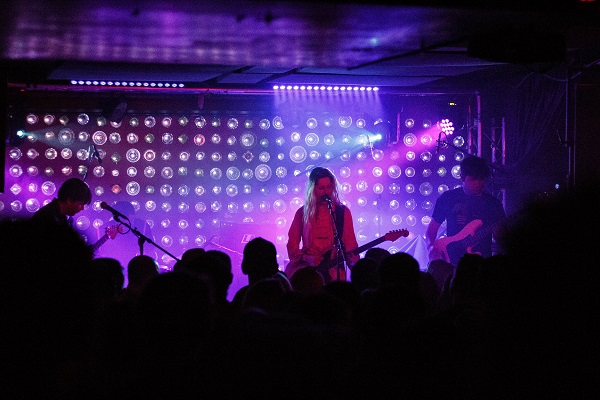 A completely sold out crowd at Baby’s All Right was what waited for Nashville’s Bully last Wednesday night. After wrapping up some tour dates with JEFF The Brotherhood, the rising act was poised for some headlining dates.

Bully is a project fronted by Alicia Bognanno and her sporadic vocal range. The band rips through grungy guitar territory to create power pop jams that you’ll want to know the words to. Don’t even try to make the choral vocals of “Trying” your own though as they hit some intense highs. Bognanno did that just fine live however. Shaking up the pace of the live set was their forte, bouncing back and forth through tracks like that and the frantic “Brainfreeze”. They closed out their set with “Milkman”, the high-octane track that initially put them on the map.

I thought there was a small something missing from the set. I’m not sure if I was looking for more theatrics or visuals, but a grittier stage presence is something that the group can develop over time and as they advance to bigger stages, which seems inevitable. Either way, they were a blast to see in person. Now we look forward to their debut full length album, Feels Like, due out on June 23 via Startime International/Columbia.

Brooklyn’s own Slothrust opened the show with a surprising complexity. On the surface, they are an edgy grunge rock trio infused with a bluesy demeanor that distinguishes them from the rest of the local crowd. The bluesy vocal drawl of “Crockpot” was coupled with seething guitar riffs and chill strumming to induce head-bobbing of all kinds of energy levels. If you’re into storytelling by way of heavy rock vibes, this band is for you. Check out Slothrust for yourself on May 19 at Brooklyn Bowl with July Talk and Drowners.