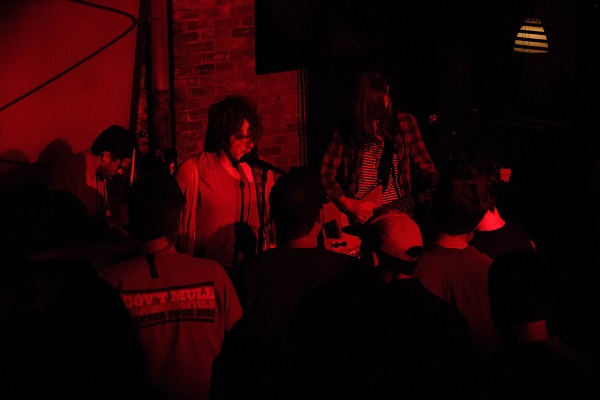 Connecticut got a little taste of the Oklahoma music scene last week when indie punk group BRONCHO stopped by BAR in New Haven, bringing along their partners in tour, Chicago’s Strange Faces.

Opening the night with some buzz was CT’s own Furnsss, who brought plenty of fuzz. They take a DIY approach with multiple guitarists and vocalists. Through the scuzz are songs that you’ll find yourself wanting to sing along to.

Strange Faces have been on tour with BRONCHO for a chunk of their North American tour and were up second. They stylistically bridged the gap between the bookend acts for the evening with a more of crispy Paul Banks-ish vocal presence. Their cover of Wire’s “Pink Flag” was on point and definitely fitting of the evening’s punk attitude.

BRONCHO capped off the night with a slew of 80s-punk influenced material from their latest full length release, Just Enough Hip To Be Woman. On vocals and guitar was Ryan Lindsey, who has a very distinct sound. He sings with the tendency to emphasize his vowels and without fear of mixing pitches. It meshed flawlessly with the thumping guitar and beat of “Taj Mahal”, possibly my favorite track of the night. The song’s moodiness was perfectly evident as he asked “is anyone still having sex?” The same thing goes for “NC-17” which utilized more vocal harmonies and uttering the song title in a pleasant falsetto.

Their set fittingly concluded with “Class Historian”, a track of theirs that has commanded the most national attention. It is possibly their most upbeat offering, littered with a steady barrage of “do-do-do’s” that set the frantic pace of the track. Its impressive that Lindsey had enough stamina and saliva remaining to successfully lay down the last of the vocals. BRONCHO is an example of a current indie rock group that knows their influences and possesses a unique sound and identity based off them.