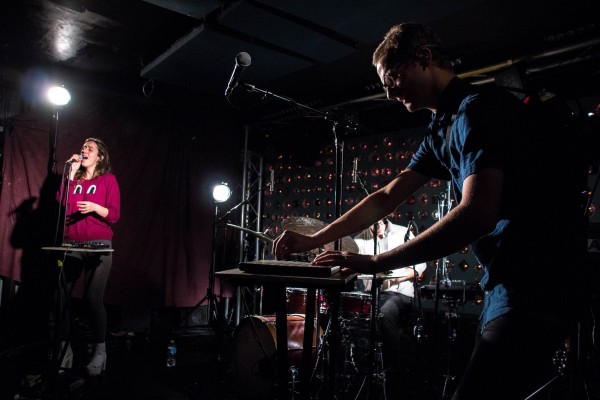 Braids, an art rock and experimental pop band from Montreal played some deep ethereal sounds at Baby’s All Right. The three piece, with tasteful electronic beats, fine tuned acoustics and vocals, and some technical drumming, delivers a raw punch of energetic music that’s also melodic and easy to listen to. A combination of experimental sounds and human emotion, Braids songs work best in an intimate setting. The signature backlight panels of Baby’s All Right were turned off for their show, instead, the band brought out some simple lamps, plugged in their electronics, and went straight for the audience’s emotions and senses. It began with lead singer Raphaelle Standall-Preston staring at several people in the audience to evoke some reactions, and followed with an explanation that she was curious to see how we reacted, and that she really wanted to connect with us. And that’s what most of the themes in their latest album, Deep In the Iris, are about: human connection, interaction, fragility, and isolation.

Their newest album was recorded during a series of retreats to the deserts of Arizona, and the mountains of Vermont and Upstate New York, the band stripped bare from the heavy electronic elements that dominated their second album, Flourish//Perish, which saw the band at a transitional period, dwelling into minimal electronic and eschewing their more streamlined dream pop roots. It also saw the departure of two of its members due to creative differences, giving the album a very different sound that works as a stepping stone for Deep In the Iris. Here the band sounds more organic, and as a result, the songs sound better live; Preston’s careful and sweet voice fluctuates between dreamy whispers to loud yelps that are riveting.

She’s front and center here, but there is still a strong sense of collaboration between the other core members: bassist Taylor Smiths and drummer Austin Tufts. Every member’s contribution is heard loud and clear, and it couldn’t have been more fun to see them masterfully play songs that deal with the fragility of life and relationships, especially feminist anthems that fight social issues that affect women. They are long time friends, and it shows here, with an album that flowed from three creative minds and a live performance that connects with you on a deep human level. The highlight of the show was their song “Miniskirt“, a spine chilling song that deals with the reality of being a woman and dealing with toxic slut shaming, and what it feels like to take a stand against it.
The band was accompanied by openers Tasseomancy, the musical/visual arts project of sisters Sari and Romy Lightman. Their songs brought together a combination of tribal drum sounds and indie folk that deal with romance. The playful charisma between the the Lightman sisters on stage seemed to be a crucial part of their presence, alternating between instruments and singing about past and future relationships, it was a nice touch to a night that was full of emotionally charged songs and complicated experiments with soundscape.