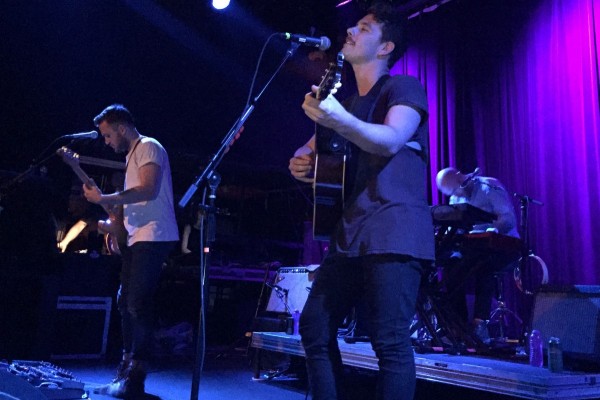 Brooklyn was home to an enjoyable, indie folk-rock extravaganza in the middle of October, where Boy & Bear featured themselves prominently during their current fall tour. This Sydney, Australia-based band brought their music to a packed audience at Music Hall of Williamsburg and proceeded to play a very healthy set of nearly 20 songs, which evenly covered both of their full-length albums, most recent of which was their 2013 release Harlequin Dream. Boy & Bear successfully continues the recent trend of bands from outside the US who have mastered the Americana sound, following popular acts like Mumford and Sons and Of Monsters and Men, and that mastery was on full display during their set.

Opening with one of my new favorite songs “Bridges,” Boy & Bear wowed the crowd with their pleasantly relaxing harmonies and solid instrumentation. As mentioned, they played a ton of songs, which gave the audience members a very satisfying lucky feeling, wondering if they were ever going to stop playing yet hoping they wouldn’t. Fans new and old alike walked away feeling like they heard most, if not all, of the songs they were hoping to hear, mixing in new stuff like “Harlequin Dream,” “Three Headed Woman,” and “Southern Sun” with old classics like “Big Man,” “Feeding Line,” and “Part Time Believer,” the latter of which sounds strikingly similar to the harmonies you might remember from Crosby, Stills, and Nash back in the 70’s. They even covered Crowded House’s “Fall At Your Feet” during the set, which highlighted both the band’s talented vocals as well as the brief inclusion of Neil Young’s “Heart Of Gold” during the tune. Every song offered up by lead singer Dave Hosking and the rest of the quintet fit perfectly into place, ending up giving the Williamsburg faithful a very well-balanced, enjoyable musical experience to satisfy their folk music cravings.

Opening the show that evening was a fantastic folk-pop band from the San Fernando Valley named Run River North. Their set was nothing short of phenomenal, as their sextet incorporated two sets of violins and produced an amazingly high-energy performance from start to finish. Lead singer Alex Hwang actually made his way near the back of the venue during one of their songs, providing a full, in-your-face experience for the audience. While all of Run River North’s music was wonderful, the big musical takeaway was their song “Beetle,” which they played for nearly 8 minutes, jamming out and having just as much fun as we were in the crowd. They were the rare opening band where the crowd clamored for an encore, with even the house’s music getting into the mix, playing the Steely Dan classic “Do It Again” as they walked off stage. Run River North is most certainly a band that you need to check out, so check out their recently released self-titled debut album as soon as you can.