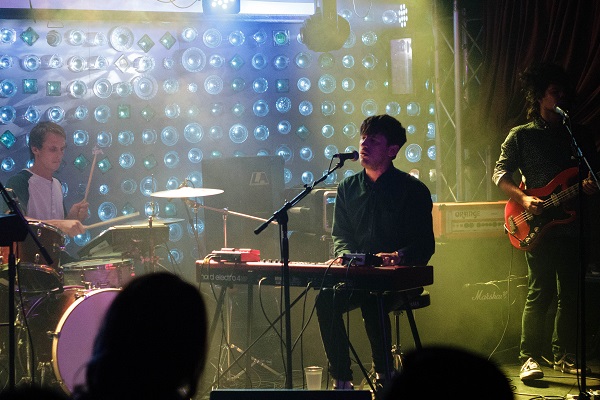 There is something about the self-titled debut LP from London’s Boxed In that really grabbed my ears. The project of Oli Bayston, a founding member of Keith, is an electronic dance-pop album laced with Bayston’s piano handiwork. I liken his group to a super chilled out version of Miike Snow. When I caught them live in their second ever show in New York (they played Mercury Lounge the night before), you had half of the room at Baby’s All Right happily and peacefully vibing out. The other half took the opportunity to dance along with the unpredictable shifting tempos of each tune.

Bayston’s furious fingers lit his piano on fire all night, especially in tracks like “Mystery” and “Subtle Knife”. He shined in perfect cohesion with his band on “All Your Love is Gone”, where his piano and some killer guitar/bass intersected for a complete listening and viewing experience. “Foot of the Hill” was another fast-paced head bobbing affair that was a ton of fun to be in the audience for. Boxed In’s sound possesses strong electronic pop values, buts it is the piano injection that sets them apart from the next band in their genre.

Massachusetts native Ben Talmi opened the show. You’ll see his music described online as glitch pop. He performed on guitar with the backing of some friends on violin and cello to make for an orchestral experience. His most recent output is a catchy well-arranged single called “I Know It’s True” that smoothly fits into the current indie pop realm.