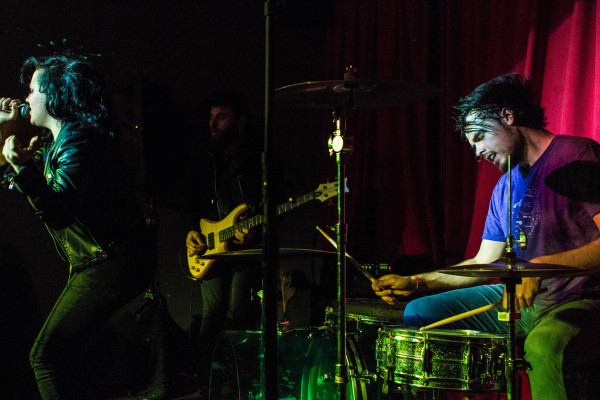 We’ve been following Boom Said Thunder with some interest for a while now. The fuzz rock trio of Abby Bickel, John Magnifico & Will Thomas added to their discography recently with the release of a new single, Summer Twin, which tonight’s gig was in occasion of. Like-minded rock bands, Designing Women and Plates of Cake supported.

Designing Women is Catherine Herrick (bass), Naomi Scott (drums) and Alyssa Panetta (guitar); all three rotate lead vocal duties, so each song in their set differed widely. I especially dug their short number, “Boys”, a light-hearted hate anthem where all three yelled in unison. I’d karaoke that! The trio’s been together since 2013, what I heard was interesting enough for me to wonder about any proper recordings coming out soon.

Plates of Cake filled in last minute for Les Bonhommes, who dropped from the bill citing personal injury. The group, which is Ian Burns, Jonathan Byerley, Joshua Carrafa, & Gann Matthews, has an output in the garage rock realm. A lot of their record, Teenage Evil, hits some choice rhythms both mellowed and assertive.

Summer Twin‘s “Carnivore” has been one of my favorite tracks this year, which would be Boom Said Thunder’s closing item. Building up to that we heard the single’s title track and a selection from their LP, Exist. What I take from Boom Said Thunder’s live show most is that it’s a true interpretation of the ferocious energy they convey in their music.