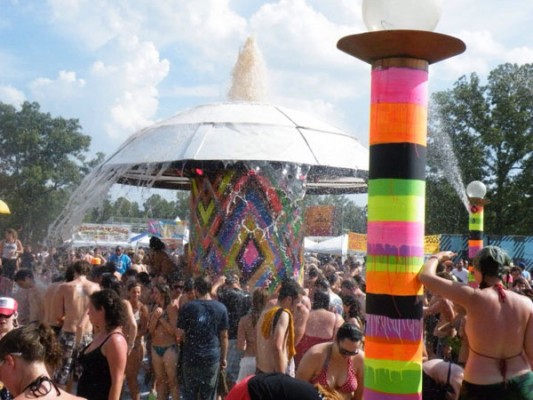 I was jet-lagged, awake for 36 hours straight. But rather than making an attempt at a normal sleep cycle, I spent my time pinching myself awake and refreshing my browser. I was one of what seemed like millions who bogged down the Bonnaroo website. Tickets for the 2014 festival went on sale and with it, the stressful song-and-dance to nab tickets. (and complete the check-out process without the site crashing) While many were looking to take advantage of the price break, most (like me) were spell-bound by the stellar group of musicians scheduled to perform.

One week after this year’s Bonnaroo announcement, we give you a list of 15 acts we look forward to seeing and give you a stellar playlist to keep you excited through Spring.

Vampire Weekend
There’s very little to say about Vampire Weekend. The band infuses genres most of us don’t listen to regularly into catchy, indie-pop/rock smash hits. The band deserves the top-line slot for sure. Be ready to sweat like crazy when they hit the stage. New Yorkers who want to avoid the Bonnaroo grid-lock can see Vampire Weekend headline one of the Governor’s Ball three dates.

Sarah Jarosz
I have to admit that up until the announcement of Bonnaroo’s lineup, I not once heard of this person. It happens often but when that name is ahead of Okkervil River and Cloud Nothings, it is someone to check out. At only 22 years old, the Austin-born mandolin aficionado can call Nickel Creek and Dolly Parton label-mates and is one of the few musicians who can claim to have not one but two albums chart on both the Billboard Bluegrass and Billboard Rock chart at the same time. Connecticut fans may want to head to Infinity Music Hall on March 9th to see her live.

Frank Ocean
Randall’s Island will undoubtedly go wild, thanks to appearances by three most notorious members of the OFWGKTA posse. (Earl Sweatshirt, The Internet and Tyler, The Creator) So it is a great surprise to not only see an absence of the aforementioned but to see Frank Ocean himself on the line-up. He’s kept relatively quiet following the release of channel ORANGE which makes me believe that new material is a possibility when he hits the stage.

Andrew Bird & The Hands of Glory
I am curious to see Andrew Bird’s name alongside a backing band but based on my prior experiences of seeing him in a multitude of venues, including Newport Folk Festival, an NPR in-studio performance and the intimate Tarrytown Music Hall, I have no worry that Bird will bring his eloquent loop-style indie-folk music to life.

Vance Joy
Sharing an honor only the likes of Gotye, Mumford & Sons and Muse have known, Vance Joy is this year’s Triple J Hottest 100 winner. (read more about it here) The man deserves it – and deserves his spot on this year’s Bonnaroo roster. It’s hard to say what stage he’ll play on but it’s safe to say that you should arrive early – it will get packed. See Vance Joy as he opens for another great band, Young The Giant. Tickets for Wallingford, CT’s show are still available. For those who want to see him open this Saturday’s show, you may want to try Stubhub.

Ms. Lauryn Hill
Say what you will about Hill’s inability to pay taxes or read a clock but once she goes into “Everything is Everything” the crowd is sure to forget her public-eye woes. She’ll certainly be the highlight of Saturday or Sunday morning. Here’s to hoping there is a lot of Fugees songs. (and an appearance by her band mates wouldn’t be bad either)

Real Estate
There is no better a feeling than waking up, watching the sunrise, getting a tan-on and hitting a feel-good band at noon. If I had my way, Real Estate would be the first band on the schedule for Saturday or Sunday. Their indie/surf-rock band is from close-by Ridgewood, NJ and will be releasing their third full-length (Atlas) on Tuesday. Expect to hear a lot of that album at Bonnaroo and at the sold out Music Hall of Williamsburg and Webster Hall shows in April.

Classixx
The day after LCD Soundsystem called it quits was a very sad day. I (and probably many others) wondered who would fill the void and what project the bandmates would show up in. Classixx answered both of those questions, featuring Nancy Whang on Hanging Gardens‘ stand-out track “All You’re Waiting For” and bringing the 70’s-inspired dance-infused electronic music to Bonnaroo. Cure the mid-week blues when Classixx opens for Gem at Music Hall of Williamsburg.

Bobby Womack
Bobby Womack is soulful and beautiful to listen to, making him the perfect candidate for a Bonnaroo slot. Many will recognize his voice from Gorillaz’s hit “Stylo” and I will have my fingers crossed for a rendition of the song with a guest appearance by Damon Albarn.

Cage The Elephant
Cage The Elephant was the most underrated performer I saw at the last All Points West. (RIP) The band only has three albums but there is something for just about every music fan. Fans who can’t make it to Bonnaroo can see this band tear the roof off Terminal 5 when they open for both of Foals’ shows. Tickets for Tuesday, May 6th are sold out but the next day’s show has plenty of tickets still available.

Superjam with Skrillex and Friends
Superjams are what make Bonnaroo so wonderful. Where else can you see musicians from all walks of life come together and jam on the spot. And this year marks the first year an EDM artist curates the Bonnaroo-staple. Will there be guest appearances by other EDM artists like Zedd and Kaskade? Will he find some strange way to collaborate “Bangarang” with Seasick Steve or Carolina Chocolate Drops? Your guess is as good as mine.

Poliça
Poliça combines rock, synthpop and trip-hop in an eloquent fashion, making them the perfect late night act for smaller stages. (or the perfect band to precede CHVRCHES) The quintet has collaborated with Justin Vernon in the past and I hope to see the band collaborate with another Bonnaroo-mainstay at the festival. Those who won’t be making it to Bonnaroo (or for those brave enough to hit NYC after the long weekend) will want to see Poliça at Bowery Ballroom and Music Hall of Williamsburg the following Monday and Tuesday. Tickets for both shows are available but not for long.

Lionel Richie
It was the opportunity to see music icon Stevie Wonder that brought me to my first (and only) Bonnaroo in 2010. This year, another icon brings me back. Sure, we know Elton John is headlining the festival and sure we know he’s going to be amazing. Lionel Richie hasn’t really garnered the buzz he deserves, especially when a portion of his discography is a staple to every wedding since the 1989. Bonnaroo is just part of the extensive tour Lionel has planned and there are simply too many dates to list. (although it is safe to say that most of us can have a chance to see him more than once)

City & Colour
When I saw him perform 2012’s Newport Folk Festival, there was not one dry eye in the house. The guy knows how to involve an audience, whether it is with a sing-along, anecdote of his past or a joke. Check out Dallas Green’s acoustic project if you are headed to the festival for Meshuggah and need to see what Alexisonfire’s former guitar player/vocalist is up to nowadays.

Danny Brown
I will admit, Danny Brown will be a poor choice to see at Bonnaroo unless you are a fan of hip-hop. He doesn’t have the commercial appeal Kanye West has garnered or the smooth sensibility of Frank Ocean. But if you are in-need to satisfy your hip-hop craving at Bonnaroo, you can’t get any better than Danny Brown. It’s only a matter of months until he becomes a household name and his latest release (Old) features Schoolboy Q, Purity Ring and Charlie XCX. Danny Brown plays a sold-out Bowery Ballroom on Sunday, April 6. Lucky for you, tickets to his Music Hall of Williamsburg show on Tuesday, April 8 are still available. (for now)

To our readers who are going, I hope to see you there. For those who prefer the convenience of Governor’s Ball’s close proximity and regular baths, keep an eye out for my coverage of the festival in June. Tickets are available at the Bonnaroo site. You can even reserve tickets on a payment plan!