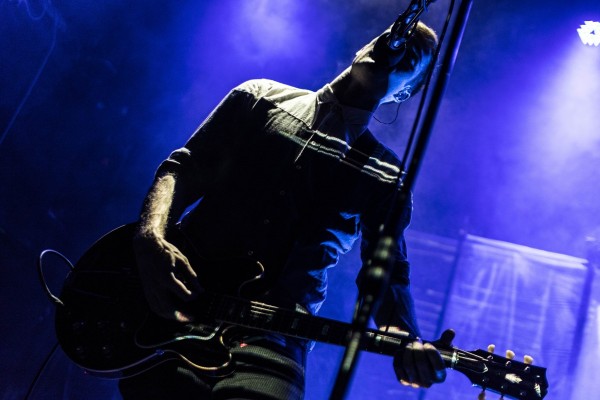 If one could calculate cool, electronica duo Bob Moses would be topping those lists currently. They are well regarded for their winding and stripped down amalgamations of house, dance and ambience, not unlike the now-concluded Darkside. Riding a massive wave of momentum from the recent release of their debut album, Days Gone By, the duo of Tom Howie (vox, guitar) and Jimmy Vallance (keys, prog) have embarked on a national tour supporting it. This is the band’s first stab at traditional concert halls, and with a discography that includes another solid LP’s worth of tuneage (All In All), they had enough armaments at their disposal to make an impressive debut, and didn’t waste the opportunity, selling out Bowery Ballroom.

I’ve been vibing to Bob Moses now over a year, ever since their single “First to Cry” was released, marking the start of their relationship with Domino Records. It was soon joined by “Grace”, then rereleased at the start of this year as part of All in All, which included their collection of music spanning back to 2012. Particular highlights for me at this performance were hearing the hottest track off Days Gone By, “Tearing Me Up,” and “Far From the Tree,” from their annals, which was impressively sung live sans any looping.

The duo had live spun, abstract projections behind them, but were otherwise fairly minimal in presentation, which syncs up well with their sonic mantra. The crowd around me needed nothing but the sounds pouring forth from the stage to find release. However, the band is missing any sort of percussion live, and sans that, what Bob Moses (and many other similarly infringing electronica acts) do for me is merely a sort of show and tell. You’re just expected to come ready to dance to the sounds they know you love and overlook whatever’s preprogrammed. If the band’s material is good, we, the audience have proven we are mostly okay with that.

Desert Sound Colony, a British based guitarist/producer whose sound is a stone’s throw or less from the likes of Bob Moses, is supporting along much of the tour. Performing solo over a track he wasn’t much for watching, but the tunes he’s released on this year’s Cracks In My Soul EP are very compelling ambient dance, and as the venue swelled with participants, the quality of its sound had many sets of feet moving. First opener Midas felt more like a karaoke act, and weren’t taken seriously.