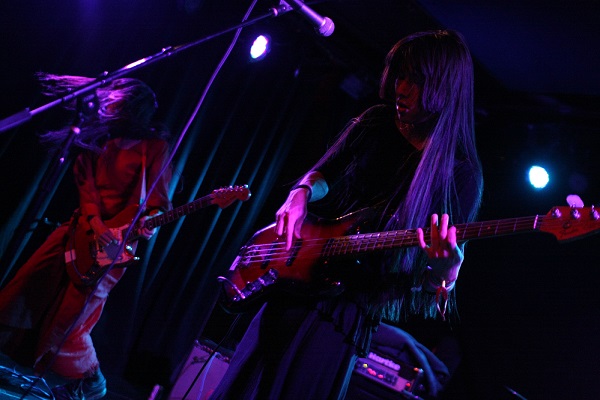 Bo Ningen embody the wild side of rock music. Violent rhythms, interpretative dance, and long flowing hair all combine to create a very expressionistic stage presence. The Japanese rockers, whose name translates to “Stick Men” in English, made their NYC debut last week after a couple prosperous weekends at Coachella. The tour was in promotion of their third album, III, which officially releases next week.

Bo Ningen sing entirely in Japanese, so all of their lyrical content was lost on me. The psychedelic origins of their music was not. Hardly a moment was spared during the whirlwind set they played, and the tension only escalated as the set drew to a close, where madness took over. Guitars swung by their neck in metronome, notes drawn from the pedal wires, upside down instruments, and a balancing act upon the amps were mere highlights of the chaos.

There were two local openers tonight. Ken South Rock, up first, were a rabble rousing duo of drummer and guitar. Discordant and unhinged, I could see their energy, once refined, attracting and fomenting an unruly mob. They were certainly fun to watch. These People followed, but as a quintet featuring two drummers, they didn’t quite match the manic output of the bands they were paired with.