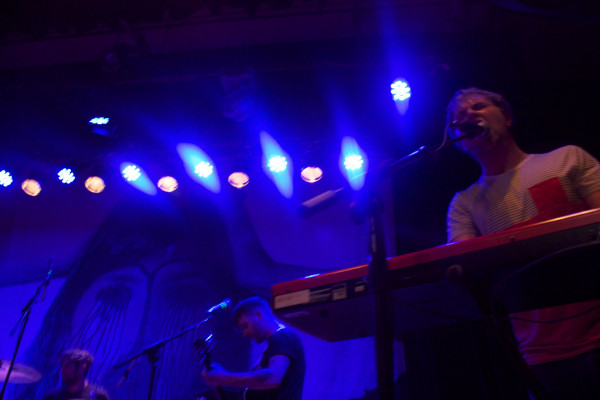 Seattle thrash outfit the Blood Brothers officially announced their breakup in 2007, with members moving on to form projects like Head Wound City and Neon Blonde. Young Machetes had been released only a year earlier, packed with so much frantic energy that suddenly it all seemed to come to an abrupt halt (which ultimately, a lot of their songs will do.) Their impossibly chaotic style would switch seamlessly mid-song to something you could almost dance to, if maybe you were also suffering from a seizure. Dueling front-men Jordan Blilie and Johnny Whitney screamed, shrieked, and pranced across the stage making them the band to know about during the fever pitch of screamo acts in the mid 2000s. It was epic when I was a teenager…how could they just stop?

Fast forward to 2014, to a much anticipated announcement of a Blood Brothers reunion at FYF fest. For those of us who never had the chance to see them play live, there is a flicker of hope. Quietly, more shows are announced until BrooklynVegan reveals Warsaw as the next venue for a late Sunday evening show. At doors, the line stretches down the sleepy Greenpoint block full of fans who can’t believe this is actually happening. After talking to a few, it’s clear that most people just assumed we had all missed our chance to see them play. The vibe is as anxious as it is glorious.

Violent Bullshit was the only opener, recounting for the crowd that fifteen years earlier the Blood Brothers had been opening for their projects instead. Clearly, they were excited to be returning the favor for this reunion show. With members hailing from bands like Orchid and Black Army Jacket, their sound is as snarky as it is loud. The crowd was receptive and absolutely looking to burn off steam. Similar to the Bad Brains, they’ve got an aggressive amount of PMA on songs with titles like “Seattle Fuck Off”. They closed their set with a cover of Bikini Kill’s “Rebel Girl”, which fit pretty nicely with the Pacific Northwest theme of the night.

For a backdrop The Blood Brothers used the imagery from the album cover of Young Machetes, a black and white woman with a bright orange scrawled-out face. Opening with “Guitarmy”, the first song off of ...Burn Piano Island Burn, everything crashed together and Warsaw erupted into a pile on. The band commanded the stage for 22 songs, pulling mostly from their last few albums but making sure to include a couple for the diehards like “Mutiny on the Ark of the Blood Brothers”. It was as if they had never left us, from the intricate keys of “Laser Life” to the slow burning “Crimes“. Possibly their biggest hit and one of the few music videos you can find of them on YouTube, “Love Rhymes with Hideous Car Wreck” was an absolute mess of limbs. “Set Fire To The Face On Fire” was saved for the beginning of their short encore, which closed out with “Shame“. For most of the show it was very difficult to tell where the crowd started and the band began, with members leaping into the crowd every other song and guitarist Cody Votolato hand-walking through the front row.

It’s unclear if the hiatus is still on, but the band has stated in interviews that they will not be releasing any new music. If they all go back to having families, careers, and other bands that’s fine by me because I can finally say I saw them live. But wait, there is hope for you too! Check them out at Fun Fun Fun Fest this November in Austin, Texas.