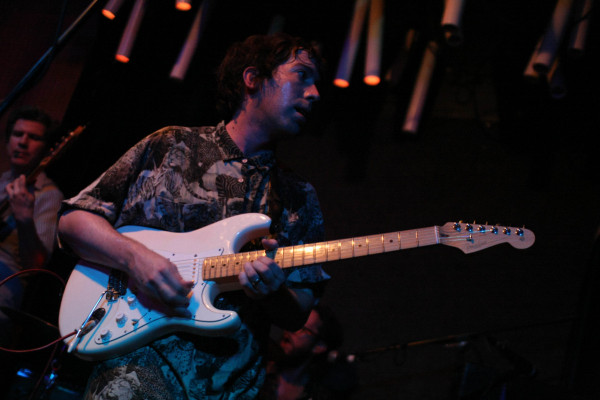 Bishop Allen is a name with some weight upon it in the indie world. Dormant for some five years, the band reemerged this year with a stellar new album, Lights Out. I hadn’t really understood their significance until I stood watching them a few feet away from lead singer, Justin Rice. The album is solid independent of their discography, but it truly shines as the current finale of their discography. Bishop Allen has embarked on a national tour in support of it, and I caught their stop at Glasslands.

Justin Rice is joined on stage by his wife Darbie on keys, Christian Rudder on ukelele, Keith Poulson on bass and Michael Tapper on drums. The live show was a nice tour through their discography, touching on each album’s virtues. Vocals were generally Justin’s, but it was Darbie who closed out the finale with a somber melody. Bishop Allen returns to the CT area for a show at The Outer Space on 10/14.

On tour with Bishop Allen is JBM (Jesse Marchant). The mellow folk rocker and his band put forth some moving pieces that really stand on their own.  He has a new, self-titled LP out on September 9th, his third. You can also find him at Rough Trade in September opening for our pals, Milagres.

Also on the bill tonight was Alden Penner, famed as one half of the recently reunited Unicorns who were very busy last weekend opening Arcade Fire’s Barclays gigs. He played a set around his solo material, which includes a 2014 record, Exigenesis. It’s mostly chilled out rock music, backed by a band that includes synth and violin. I found his mild mannered stage presence most charming, his vague resemblance to Scott Pilgrim only adding to that.