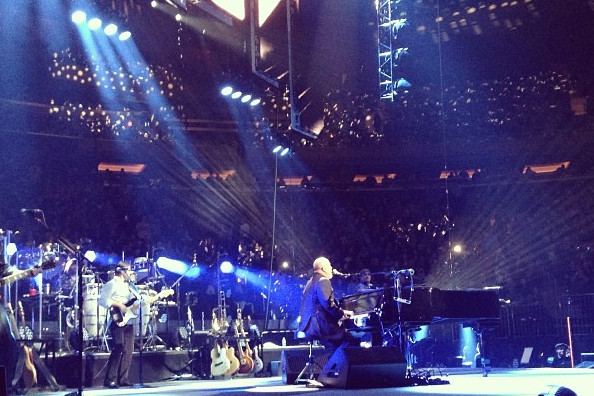 I’ve lived on Long Island all of my life. I’ve grown up with all of the Atlantic coast beaches, locally produced wine and thousands of square feet of shopping malls. And whether you are a fist-pumper in one of the many nightclubs here or a fist-thrower that frequents church basement shows, we all agree that Billy Joel is the cornerstone of Long Island music.

Eight years ago, he became the record-holder of the most consecutive sold-out shows at the most famous arena, New York’s Madison Square Garden. Anyone who attended any of the twelve sold-out performances would tell you how lucky he/she was. Joel went off-the-grid just as quickly as he came charging in.

So it was great news for Joel fans and those who call the Tri-State area home when he announced a once-per-month residency at the venue he’s called home for over thirty years. Prior to this announcement, Billy Joel had played over forty shows at the arena and the first of these monthly shows was to be his first there since breaking the record eight years prior.

I had the honor of attending the first of these concerts and it is everything you’d expect from a rock & roll icon back in the limelight. He opened the show with the underrated “Miami 2017 (Seen The Lights Go Out on Broadway)” and pounded 19 other songs before covering an encore that included “Big Shot,” “You May Be Right” and the night’s closer “Only The Good Die Young”. He also brought his sense-of-humor, commenting on everything from his faulty spinning piano and how he expected to look more like Cary Grant than his father.

Billy Joel’s residency takes place once a month until further notice. Although many of his upcoming performances are sold out, tickets are currently available for August 7 and September 17. Check out Ticketmaster regularly because tickets are going fast and dates are being added regularly. Because the layout of MSG is new and the acoustics are still exceptional, definitely try and attend one.

Below is the set list for the January 27th show. You can surely expect tonight’s show and the other shows to not differ too much from it.

Miami 2017 (Seen The Lights Go Out On Broadway)
Pressure
Summer, Highland Falls
The Longest Time
Blonde Over Blue
Everybody Loves You Now
All For Leyna
Movin’ Out (Anthony’s Song)
Where’s The Orchestra?
Allentown
Big Man On Mulberry Street
New York State Of Mind
Zanzibar
The Entertainer
She’s Always A Woman
Don’t Ask Me Why
The River Of Dreams
Scenes From An Italian Restaurant
Layla (Piano Coda)
Piano Man