Billy Idol @ The Space at Westbury 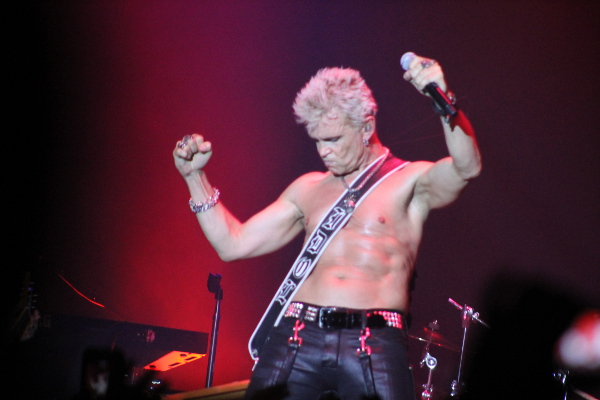 Being born in the latter part of the 1980’s, there are simply parts of the decade I will never be able to identify with, especially when it comes to music. I’ll never understand how Bruce Willis (yes, Die Hard action star Bruce Willis) had a hit single and how “Mickey” ever squeaked onto the radio. But not all music from that era is foreign to me.

Billy Idol is one such artist. As a founding member of punk pioneer Generation X, Idol has been a leading example of exactly what a solo music career should be. Since going rogue, he’s sold over 10 million records and tours regularly. He’s also the most memorable part of The Wedding Singer. (besides, of course, the rapping granny)

His current tour brought him to Long Island, where he performed at The Space at Westbury. The demographic was exactly like one would expect: men and women with kids my age (or older) whose nostalgia continues to be the driving force behind many of these artists from decades past. The former LI resident opened up the set with “Postcards from the Past”. I mention this because it is a song I was unfamiliar with and despite hearing it for the first time, it was his energy, the matched energy of the band and his youthful charisma on stage that caught the audience’s attention. His hits were all there, including “White Wedding” and “Eyes Without A Face” as well as a new track, “Bitter Pill”. His energy was unwavering throughout the set. Longtime lead guitarist, Steve Stevens, was the clear-cut, stand-out from Idol’s touring band. He further confirmed to me (and many of the others in the crowd) that he is as exceptional a solo musician as he is with his other musical collaborations. (i.e. Michael Jackson and Vince Neil) His hour and half headlining show also included a Tommy James & The Shondells cover, a famous song by The Doors and quite a few Generation X tracks.

His new album entitled Kings & Queens of the Underground is expected sometime in October. Set list and photos (by Vallerie Clark) from his The Space at Westbury performance can be found below.

BILLY IS THE BEST, ALWAYS SEE HIM AND TRAVEL TO GO SEE HIM TOO. HE IS A CONSISTENT GREAT SHOW TOO! AND THE "THE SPACE" WAS A GREAT NEW VENUE AND IT WAS GREAT TO SEE HIM THERE!!!