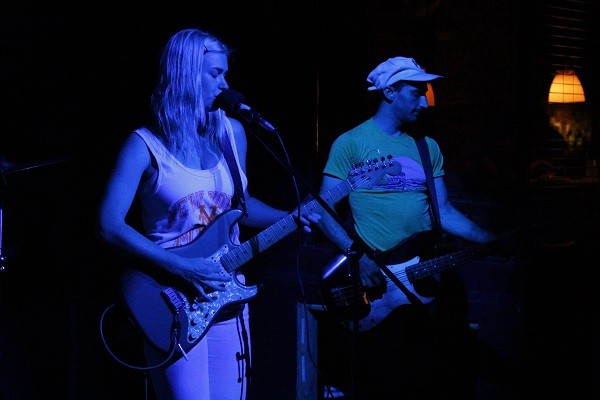 Brooklyn has produced yet another band led by a talented tandem in Frankie Rose (Crystal Stilts, Vivian Girls, Dum Dum Girls) and Drew Citron (Avan Lava). Their combined efforts, Beverly, came to BAR in New Haven last Wednesday. Sadly, Frankie Rose is not on the band’s extensive tour roster, but I wasn’t about to let that dampen my spirits.

Beverly received opening support from duo/sisters, Verdigrls. Anna and Catherine Wolk are classically trained in violin and cello, and with synths overlayed, they produce a unique airy sound. They performed tracks new and old and tossed in an extremely cool take on Daft Punk’s “Doing It Right” which will make me never look at the original quite the same again.

Although it was still rather deflating to discover that Frankie Rose was not featured in the live Beverly lineup, Citron successfully fronted the band and did their music justice just fine. They featured a loaded set of tracks from their July 2014 release, Careers. Their fuzzy, radio-friendly tracks “Honey Do” and “You Can’t Get It Right” show off the experience that Citron and Rose possess. They were just as exciting live, serving as the backbone of the Beverly set. It was a super quick set, but that’s what happens when you don’t have tracks much long than three minutes a piece. Citron and company were strong performers, but I’d love to see Frankie Rose perform live in this unit one day.